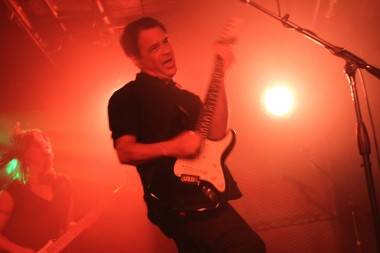 Photos – The Wedding Present at the Biltmore Cabaret, Vancouver, April 5 2012

The Wedding Present played the Biltmore Cabaret last night, almost two years to the day that the long-running U.K. band played the same venue. That time, the quartet played the entirety of its second album, 1989’s Bizarro, along with a handful of other tunes from its catalogue (as well as that of frontman David Gedge‘s other band, Cinerama).

Last night the group adopted the same format, with new (from their current album Valentina) and old songs bookending a full-on rendition of an earlier album: in this case, 1991’s Seamonsters. This record includes Wedding Present classics as “Corduroy”, “Heather” and “Suck”.