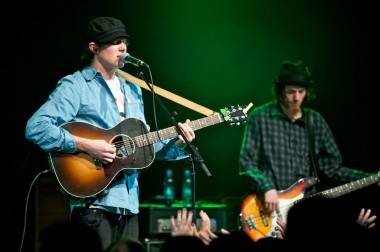 2011 has seen some amazing artists coming out of B.C. The Peak Performance Project has shed light on some of the province’s hardest working acts, including The Belle Game, Hilary Grist and The Matinee.

But Victoria’s surf-folk band and fan favourite Current Swell stood out above the rest and took this year’s top prize. They’ll be celebrating their huge victory with a NYE bash at Vancouver’s Vogue Theatre in just a few days alongside The Boom Booms and Mother Mother‘s Ryan Guldemond.

But before their big show, founding member and lead singer Scott Stanton revealed what it was like to be embraced by B.C.’s music community and the wealth of knowledge the band gained from touring with the likes of Xavier Rudd, Ash Grunwald and The Beach Boys. Current Swell headlined their own shows throughout Canada in the fall and, with their new record Long Time Ago hitting record stores throughout the world in January, Stanton and the rest of his laid-back crew can expect even more attention and praise to be thrown their way in 2012. 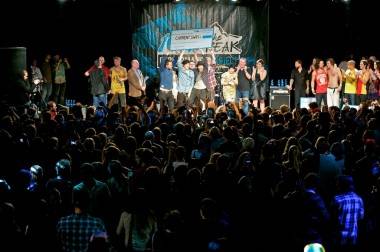 Ria Nevada: First and foremost, congratulations on the Peak Performance Project win! Is it a little strange gaining all this local publicity and attention when really, you guys have been touring the world and playing huge venues for a few years now?

Scott Stanton: I don’t see it as being weird. More just like overwhelming? It’s just been hard, I guess. It’s been a little more work… we just did a big tour across Canada and every single day it would be like wake up, interview, interview, then we drive and do another on-air interview and performance then play a show that night. We are definitely glad to do it because it’s part of the business, and we meet a lot of people. So it’s been good!

RN: And you guys have mentioned in the past how the band just sort of fell together very naturally. Did it feel very foreign being in the Peak Boot Camp and gaining all this structured training on dealing with the press, tour planning, music law, etc.?

SS: We fell together so naturally, we began touring off the bat. It wasn’t like, “let’s play a bunch of local shows first”. It was interesting because being in classes, it was like, we’re going to meet management or a booking agent, or all these things the band already has? It’s cool because we knew a lot of the stuff already, but to learn more was awesome.

RN: The impression that I get is that it’s sort of a crash course in “how to be a star”! What are your thoughts on talent shows like American Idol and The X Factor? And the idea of “instant fame”?

SS: One thing we learned in the bootcamp was to be honest in your interviews. I think me and a couple of the guys in the band were not into the idea of The Peak Performance Project. Just because I never ever thought of music as a competition. And even when we were playing with these 20 bands, it was like, how do you judge which band is better? Because all these bands in my opinion are better than us! How do you pick the best? It just doesn’t make sense.

But when we got into it, I really loved the whole idea of meeting new people, networking and learning how to do things better in the industry, and just seeing the big picture of the whole band and how they work as a machine. But yeah, when it comes to shows like American Idol, I don’t watch them but I guess it’s a good way to find talented people?

RN: And I would say you guys had one of the best music education experiences ever opening up for the Beach Boys! How did that gig come about?

SS: Yeah! We’ve been very fortunate getting to open with very well-toured groups. Like The Beach Boys, it was really cool to meet them and play with them, and we’ve gone on tour with The Beautiful Girls, and they’re a very famous Australian band, and Ash Grunwald. It’s cool to have the upper hand on getting the opportunity playing with people who do this for a living and just enjoy themselves! It’s experience you can’t buy!

RN: And similar to The Beach Boys, you guys got pigeon-holed early on with the surf-rock label despite the different styles and genres you draw upon. Are there any bands, artists that you think people would be surprised to find out are a big influence on your latest record Long Time Ago?

SS: I listen to a lot electro stuff. One of my favourite bands of all time right now is a band called The Whitest Boy Alive which is like a live dance group. The music that I truly love and get inspired by and thrive off of is stuff that’s just timeless for me, like songwriters like Mason Jennings. But there’s a lot of bands that I listened to and I loved at one point, and now I would never listen to again!

RN: Care to divulge any guilty pleasure artists or songs that are currently on your personal playlists?

SS: Extreme guilty pleasure? Justin Bieber. No, just kidding. There’s nothing that I can think of that would be like “You listen to them?!”. I like everything. But probably right now, a band called Fruit Bats, I’ve been listening to them a lot.

RN: Well Scott, congratulations again on the big win! And good luck with your headlining show at the Vogue! A great way to end the year!