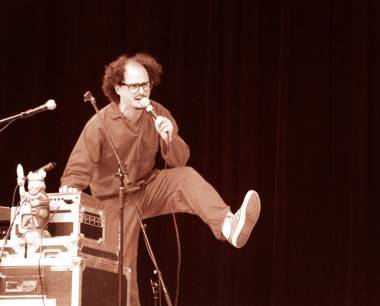 – photos and review by Tamara Lee

In a day and age where they say it’s all been done, it’s a special treat to encounter something unique – even original. That is where Montreal’s curious musical entity Socalled comes in.

Besides being one of the stranger sights – an older man with large window glasses, a spastic thinning afro frock, and red dancing pajamas – the meat and potatoes of it was really the musical mash-up. Socalled is known for producing a combination of traditional Jewish music (Klezmer) with funk and hip hop. Although this combination is unexpected at best, the real surprise is that it works.

After uncovering his first inspiration, a record of accordion music from the ’30s, Socalled (Josh Dolgin) discovered that it nicely matched some funk music albums he owned. He ran with this idea and quickly gained attention and respect of his musical deities such as Fred Wesley (former trombonist for James Brown) and C-Ray Walz (rapper from Syndicate Stronghold) – both of whom have contributed to Dolgin’s album and played shows alongside him at the Apollo Theatre.

Dolgin has also been warmly welcomed by traditional Klezmer fans during his travels through Europe and specifically the Ukraine. Although he comes from a Jewish background, Dolgin denounces the religion aspect, stating that he simply enjoys culture and finding little pockets of creativity that emerge from society. He says he hopes his music inspires union across these lines and based on the diverse crowd that came to hear him play at Parc Lafontaine in Montreal, it appears that his music does.