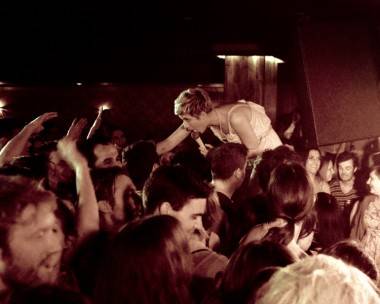 Review and photos–Yâ–³CHT at the Biltmore Cabaret, Vancouver, May 13 2011

Next up was headliner Yâ–³CHT, a Portland-based duo who made good use of visual aides to both educate and titillate audience members (see Western American Utopian Triangle). Their name, which stems from a Portland Oregon alternative school called “Young Americans Challenging High Technology”, is a moniker highly suitable for a band that utilizes laser pointers, PowerPoint presentations and vintage synthesizers to support their highly theatrical brand of post-disco electropop. The official Yâ–³CHTÂ website describes the project as a “cross-disciplinary experiment… using technology to extend physical boundaries of communication, performance, and music.” 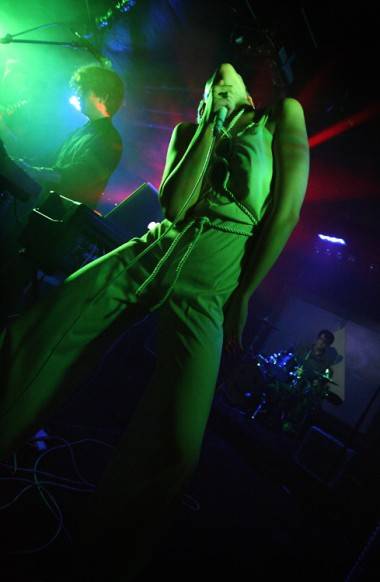 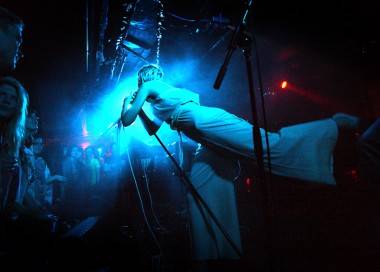 Touring members Rob “Bobby Birdman” Kieswetter and Jeffrey Brodsky provided support on bass, drums, and backup vocals respectively. Yâ–³CHT’s live show, which is impressive enough to be featured in performance projects for NYC’s Museum of Modern Art and the Rhizome forum, as well as the Media Archeology Festival in Houston, ranges from down-and-dirty disco to blazing funk to weirdo art-rock.

One unifying theme throughout the show was the band’s motivation to make as many people dance as wildly and unrestrainedly as possible, which I would say, without a doubt, they succeeded in doing. Light Asylum’s Shannon Funchess’ earlier warning to “get ready to sweat” did not fall on deaf ears, as the entire Biltmore erupted into a mad frenzy for the manic disco-punk electro of Yâ–³CHT. 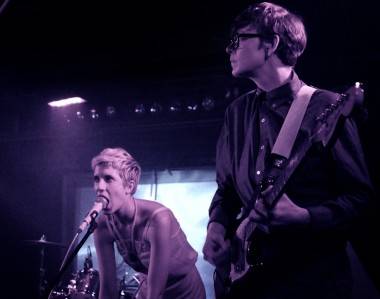