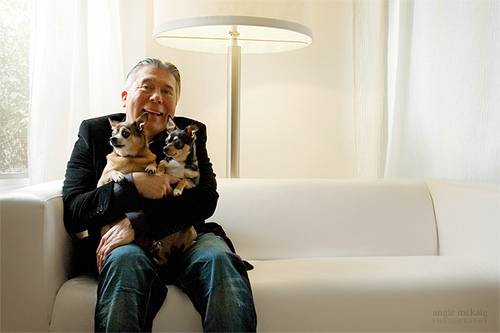 Ken Kostick in 2009 with Napoleon and Josephine by Angie McKaig

Ken Kostick, host of What’s for Dinner, dead at 58

I was saddened to learn of the passing of Ken Kostick on April 21.

Kostick was best known for the Lifetime network cooking show he co-hosted with Mary-Jo Eustace, What’s for Dinner, which ran from 1995-1998.

A good cooking show is determined as much, if not more, by the host as the food itself. Kostick and Eustace perfected the art of “easy cooking” by taking everyday fare one would find in a typically stocked pantry and turning it into something surprising and nutritious. In that regard, the show ran counter to the more complicated and potentially pretentious offerings of, say, Martha Stewart. Kostick and Eustace were far less bothered by what-or-wasn’t available in their cupboards than they were by (ostensibly) their co-host. Really, people watched the show for the salty barbs traded by the two, who clearly loved each other.

It was also very clear that Kostick was gay.

Kostick’s homosexuality was as much a part of his persona as was his ability at wielding a chef’s knife to mince an onion. Also part of his persona was his genuine passion for making good food, his wit, and the occasional caustic, bitchy burn directed at Eustace when she raised his ire. He adored his mother and spoke of her often (she even appeared on the show). He was a lovely breath of fresh air, a cheerful ray of sunshine radiating a magnetic positivity that was entirely attractive and strong-willed and showed that he was utterly comfortable with himself. He actively embraced something I loved but quietly felt was nerdy – cooking – and made it look totally cool. 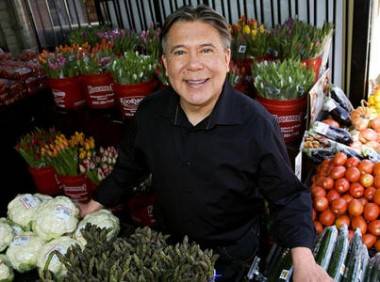 by the pair. When necessary he could be rather dramatic, and as a teenage girl who took every drama class my school offered, I could relate. At the time, Kostick’s being gay was irrelevant: he had a fantastic inner-world which he openly shared with his audience. For a teenager living in southwestern Ontario in the mid-1990s, my actual experience of and with gay people was, not surprisingly, limited.

In the years since I have befriended many a ‘mo. As a salty-and-single Jewish broad I’d like to think that really, they are my target demographic. On some level, the authentically loving and adorable relationship between Ken and Mary-Jo prepared me for many of my own. In the 10+ years since “What’s for Dinner” has been off the air the politicization of homosexuality has grown to emerge as one of the hot-button issues of our age. Though undeniable progress has been made in terms of mainstream society’s “tolerance” of homosexuals,  our collective garnish of politically correct  niceties belies a fiery ancho chilli stew, the main ingredient of which is a rich, meaty prejudice.

Kostick’s  appearance on mainstream Canadian television in the age of “don’t ask don’t tell” almost seems like some sort of puffy-shirted Valmont-like skewering of homophobia, in retrospect. Remember the Clinton years? That was Ken’s time. And despite all the ingredients of the time, Ken’s persona was devoid of that…  politics.

A few years ago I saw Kostick on a TV show defending some media treatment of Eustace who was, at the time, involved in a nasty split with her husband – a man who had left her for some other ’90s leftover, Tori Spelling. And you know what? Ken had Mary-Jo’s back – really, really hard. That’s loyalty, friendship and love baked into one.

That you loved Kostick for being the charming man that he was, was but the vanilla-bean-Meyer lemon-infused, buttercream-cheese-icing piped-with-sprinkles on the cake. He was Ken, a guy whom I would have wanted to be friends with. Or, as a (straight) male of friend mine recently said, he “wished Kostick was a neighbour who’d come over and make me dinner… he was hilarious.”

That, for me, is progress.