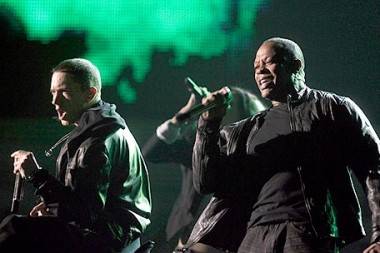 Shortly after our conversation with Louise P about Arcade Fire’s Grammy win for Best Album, our resident East Vancouver pop culture enthusiast called to leave a simple message on our voicemail: “You’re stupid.”

The reason? During the call, she had asked about the track Eminem had performed with Dr. Dre on the Grammys, “I Need a Doctor”, and if it was about Dre. We weren’t sure, so she did her own research.

LP: And then the doctor shows up [during the Grammy performance, Dr. Dre joined Eminem onstage during “I Need a Doctor”]? They weren’t looking for a medical doctor they were looking for Dr. Dre.

SC: How did you figure this out?

LP: I did my research which is something you need to do. Okay? Why didn’t you find out who Skylar Grey was [read Louise’s thoughts on Rihanna, who also performed on the track]. And there was another person on there, on the song. It wasn’t Rihanna dressed up as someone nicer looking and in better shape who sang with a better voice. She’s pretty much – well people in the know know who she is but apparently not you. She’s an American whose name is Holly… what was it now… Holly Brook? Does that ring a bell? Of course not. No. 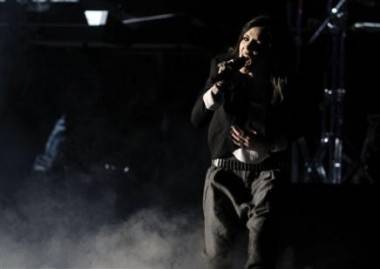 She’s getting major kudos for this song because her voice was unreal. It’s beautiful. Rihanna’s is awful. In fact, it’s not just getting slagged by me. If you listen to the YouTube over and over like a zillion times I can hear how Rihanna’s is really rough. It really is rough. I never liked her.

But Eminem is brilliant. So the song was written for Dr. Dre. Eminem did his lyrics and Dre did his lyrics and, uhm, he’s speaking to Dre because there’s a story, as in all rap, and the story’s about how Dr. Dre needs Eminem’s help because he’s been out for 12 years, not doing anything, and all the people he helped have disappeared and now he knows who his real friends are and he needs Eminem’s help and Eminem’s like, this is what they talk about in the song, Eminem’s saying stuff like how weird this is, this is the guy that helped get Eminem started and how can he help him and that kind of thing. 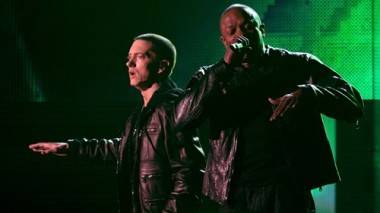 It’s a very beautiful song. I looked up the lyrics ‘cos I can’t catch them all, he goes so fast right. I read the lyrics and they’re really good.

And, also, it’s not just the lyrics. It’s not just the rhyming. Sometimes things don’t rhyme but it’s the way it’s said to make it fit. Rap is very, it’s very skillful. I didn’t realize but Dre, who’s a producer right, he does all the production stuff, right, trying to get the beats, so Eminem will do his you know, lyrics, but then you’ve gotta be able to put it to something. For example, Dre will have to figure out what kind of beat it’s going to have and how it’s going to fit in. So he’s got to make it all work together. So he has to get things to rhyme together.

He explained this on the 60 Minutes that I sent you that you never got, he was explaining how you know, people think nothing rhymes with the word “orange” and actually nothing does but then he did an example of how to get stuff to rhyme with orange. It’s how you’ll say the word. It’s really quite amazing. It’s not just a matter of getting together and just thinking up a bunch of rhymes. Like I do with my cards. [Louise often makes her own birthday and Christmas cards, writing poems that usually begin “Roses are red…”]

Except, BUT…!!! OH MY GOD! But my cards were rapped!!! Now that I’m thinking about it, they were rapped cards! Because it would bug me because Eric and Jenny [her nephew and niece] would have the best cards with rhymes that were long, they’d say out loud with their lousy pronunciation, can’t even read, this is when they were younger, and things didn’t sound the same! And I would be like, That’s not how you’re supposed to say it! And I would get the card and say it, and it would make sense! Because that’s the way I would, not just read it like they would [does an imitation of a robotic voice reading], “Hello, today’s my day…”

It was exactly that because I remember even saying, “It sounded good at home, it doesn’t work anymore,” and I’d be really befuddled about it. It used to really tick me off.

You know. So my cards were rap cards! I just realized this! Fuck, no wonder I love Eminem. I was affected by Eminem. Eminem was influencing me. Back when I was young. Five years ago [laughs].

SC: You’re ahead of your time.

Next: Louise P on Gwyneth Paltrow