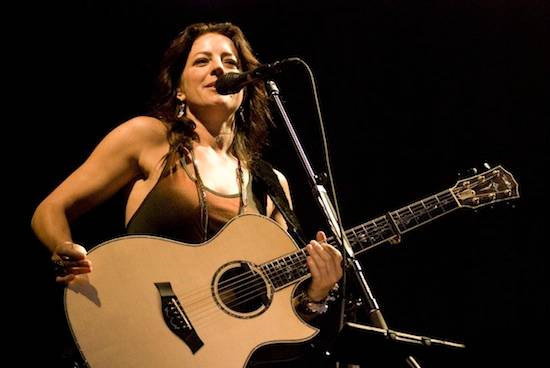 After an 11-year hiatus, Sarah McLachlan must have realized that fans across North America were good and ready for a revival of Lilith Fair. With a bevy of new female acts on the rise, and some legendary artists dishing out new releases, the tour was practically begging to be reborn. Even on the bus to the venue, groups of girlfriends in matching Canada Day outfits and temporary tattoos were already stirring about seeing their old and new faves, and formulating their dream setlists.

A few weeks before the show, it had been announced that the fair would take place in Ambleside Park as opposed to the larger, Pitt Meadows Venue. While this did raise some concern about the amount of interest the tour was generating, ultimately, it was the smarter and better choice. Right by the beach, and in full view of Vancouver’s sprawling mountains, Ambleside provided a comfortable and welcoming environment for 9600 concert-goers (the gloomy weather, on the other hand, was less accommodating).

As I entered the gates, I was immediately drawn to the Village stage upon hearing the velvety voice of one of the tour’s fresher faces, Ali Milner, as she sang the soulful, poppy number “I Wanna Be Loved by You”.Â  The Whistler native took the time to quiz her American bandmates about some imperative Canadian trivia, such as the definition of a Canadian tuxedo before displaying her jazzy vocals and piano skills on “Lost My Diamond”.Â  More of her finger-snapping tunes can be heard on her latest album, I Dare You.

Soon after staking my territory on the lawn, I wandered off to find the elusive Kate Miller-Heidke. Upon reaching the B stage, she immediately caught my eye in an acid-blue, ’80s inspired prom sort of ensemble. But what was more attention-grabbing was the incredible vocal control she displayed on numbers such as “You Don’t Even Know My Name” and “Words”. At one point, she held an impossibly high note for a good 36 seconds, followed by growling “I love you” in an angry Cookie Monster voice. Her comedic lyrics, mixed with flapper style, and operatic dynamics had me thinking she was Weird Al Yankovic’s far better looking, stylish and talented Australian cousin. She secured more laughs – and a few friend requests, I imagine – with “Are You Fucking Kidding Me (The Facebook Song)”.

Next up was Grace Potter and the Nocturnals, featuring a bluesy-vintage rock sound that has earned them mainstream notoriety over the past year. In matching retro blazers and long, polished hair, the gorgeous group was the image of the hip ’70s scene. They began their set with the pulsating bass line and strong, steady drumming of “Gumbo Moon”, erupting with Potter’s monstrously powerful voice.

Their wall of sound carried through the entire park, turning heads in their direction, and temporarily calming the appetites of those waiting in line at the concession stands. Potter exhibited her undeniable vocal talent as she delivered an a capella performance of “Nothing But the Water”. At that moment, she owned the stage. Nothing could distract from her soulful and pitch-perfect display. She and the Nocturnals continued to allure the crowd with foot-stompers like “Goodbye Kiss”, “Paris, Oh La La”, and a worthy cover of Jefferson Airplane’s “White Rabbit”.

Extremely impressed by the first few artists, I was anticipating the more established heavy-hitters that would soon follow on the main stage. First up was Colbie Caillat, famous for her acoustic-pop hit “Bubbly” and conveying girl-next door appeal. While she certainly evoked a squeaky-clean charm and poise on stage, she unfortunately did not convey as much personality as her other Lilith compatriots. The best I could say is that she has a pretty voice and a youthful appeal, but that she seems to lack the uniqueness and charisma that other acts on the bill possess.

It also did not help that she preceded Erykah Badu. The legendary poet-songstress made her entrance to a bebop bass riff. Appearing in a satin top-hat and trench to match her eclectic musical style, she started off with the hip hop/spoken word/funk tune, “Certainly”, and showed off her improvisational skills during a scat interlude. She slowed things down as she evocatively sang “I die for you, I cry for you… leap off the ledge for you” to a lovelorn piano. The song was drenched in spirituality and sincerity, as is Badu’s approach to her art. At the press conference held before her set, she confessed, “This is therapy. This is love. It feeds our families, it feeds our souls.” This attitude, paired with her originality, heard on tracks such as “On and On” and “The Healer”, should continue to inspire hip hop and female artists for years to come.

Lilith alumnus Sheryl Crow followed Badu with a series of chart-topping hits that shed some warmth on the overcast day. She looked effortlessly elegant and laid-back, as per usual, churning out break-up anthems like “First Cut is the Deepest”, “My Favorite Mistake” and “If It Makes You Happy”. I for one sang along to every tune, and I was surprised to see the sprinkle of men in the crowd doing the same. Vocally, she did not match the chops of the new kids on the tour bus, but she exhibited ease and comfort that highlighted the wealth of experience under her belt.

Sugarland was a syrupy treat for the country fans in the audience. The band definitely pulled the diverse audience together and got them shaking their behinds, a feat no other act could accomplish that day. Lead singer Jennifer Nettles enamored audiences with her cheerfulness and adorable Southern twang through honky-tonk songs like “Everyday America”, “Baby Girl” and “All I Want To Do”.

As the skies darkened, it began to feel like a happening campfire had begun at Ambleside Park. Sugarland then indulged listeners with country covers of top 40 hits like Beyonce’s “All the Single Ladies” and Neil Diamond’s “Sweet Caroline”, causing a group of adorable five-year-olds to break out dance moves they must have stolen from So You Think You Can Dance. They successfully brought out the tribal spirit of the festival.

After a brief intermission, the woman of the hour, Sarah McLachlan, finally ascended onto the main stage. Her soothing voice and lyrical piano playing on “Arms of an Angel” immediately soothed the crowd after Sugarland’s jittery set. Very few artists have the pacifying effect of this ’90s folk icon. Sensing the admiration from her fans, she waxed poetic about the beautiful BC backyard, and the amount of patriotism she felt on her nation’s birthday. She even boldly claimed, “I’m done playing anywhere else!”, much to the appreciation of her fellow Vancouverites.

Glowing in a single spotlight, she captivated audiences with more passionate ballads such as “I Will Remember You” and “Adia”.Â  She also previewed a few songs off her latest record, Laws of Illusion, beginning with the frothy single Loving You is Easy”.Â  The bouncy tune takes cues from artists like Regina Spektor and Feist, and is an unexpected, but refreshing departure from her more subdued body of work. McLachlan spoke about how rejuvenating it is to be surrounded by newer acts, providing her with a “musical education” of sorts.Â  Her call for a greater sense of artistic community and female camaraderie was heard loud and clear in Vancouver, and will continue in major cities of North America over the summer.