When not editing, publishing, photographing, writing, eating, doing hot yoga and senseless cleanses, Guttersnipe staffers like nothing more than to visit online dating sites. Okay, that’s not exactly true, at least, not anymore.

But a new player on the scene has us intrigued. Alikewise, based out of New York and launched just a few weeks ago, is an online dating service that brings people together based on reading tastes. Members (sign-up is free) are encouraged to list and briefly describe favourite, formative books, thereby hopefully finding a like-minded mate with whom to spend the rest of their Sundays reading the New York Times or, perhaps, The Fountainhead (heaven forfend) or The Da Vinci Code (heaven double forfend).

We talked to Alikewise co-founder Matt Sherman about whether women read more than men, the most-mentioned books on the site, the two books he would most like to find in common with a soul-mate and if reading habits change once hook-up is complete. 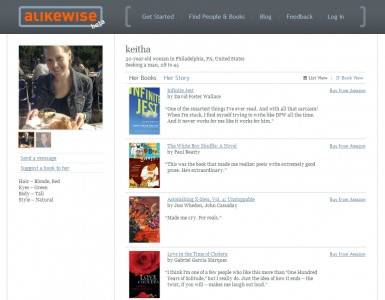 An example of an Alikewise profile.

SC: Where did this idea came from?

MS: It came from wanting such a service a couple of years ago. I had broken up with a girlfriend and I thought to myself, There’re a couple of books I’ve read and I’ve never met a woman who’s read them, and I think it would be a great conversation starter if I could find such a woman. At that point I was still working full-time and the idea rattled around in my head for awhile. As time went by at my existing job I got a itchy to try something new, something a little more challenging. I got to talking to Matt [Masina, co-founder] who is actually an old friend of mine, and the more we talked about it the more viable it sounded.

SC: What are the two books?

MS: One of them is called The Black Swan, by a guy named Nassim Nicolas Taleb. That’s a brilliant book that came out a few years ago. He talks a lot about risk, what it is, what it isn’t. I’m a nerd, I like those kinds of books. Then there’s an old classic by F.A. Hayek, The Road to Serfdom, and that’s also a classic, a 50-year-old book.

SC: Have you met a woman who’s read those yet?

MS: No I haven’t. And the ironic thing is, as a matter of policy I’m not going to date anyone on the site.

SC: Just from observation, and maybe it’s different in New York, but it seems in Vancouver more women read then men, at least at Prado [Guttersnipe’s office away from home]. Do women read more than men?

MS: Well that’s a question we haven’t answered for ourselves yet. I was talking to my friends about it and a lot of female friends told me, in their own words, well, it’s going to be all chicks. It hasn’t turned out that way though. In the early days, it’s about 50/50 men and women. But we took that into consideration, we wanted to do everything we could to encourage guys onto the site. We actually told our designer she could skew a little more masculine on the design to counteract what is perhaps an inherently feminine website. But the truth is, that’s all speculation. It’s still emerging whether that turns out to be true.

SC: So what are the numbers like so far?

MS: We’ve gotten a few hundred members in our first weeks. We haven’t done any press, it’s all been very organic and word-of-mouth. We’re getting about 10 sign-ups per day but I expect that to accelerate soon. A couple of bloggers have written about us; they found us completely unsolicited, so that’s a little bit of traffic our way.

SC: It’s free now, do you have any plans to start charging?

MS: That remains to be seen. Our initial intention was to start charging for certain things. There will always be a free version of the site. We’re trying to figure out what can we charge for? We’re still thinking about it. For example, we link through to Amazon, so people can buy books. We get a little commission on that. And we have a couple of other ideas as well. The short answer is, we don’t know. This whole thing is a discovery process. All of our ideas are really assumptions.

SC: Where are the people coming from?

MS: We’ve gotten a pretty wide variety, we’ve gotten someone as young as 20 and as old as 63 so far. We’re getting people from all over the world, asking us to support them. We just rolled out Canada, and in the next week or two we’ll be making the site available for Australians and Brits.

SC: Who’s proving to be the most popular author?

MS: For some reason, Vonnegut is off to a great lead so far. He seems to be a very popular guy. Among the men we’re seeing a lot of people who like a lot of sci-fi, so you’re seeing guys like Neil Gaiman and William Gibson; among the women, we’re seeing Stieg Larrson [The Girl With the Dragon Tattoo].

SC: Do you think people’s reading habits, like eating habits, change once they’re in a relationship? Like, all of a sudden they’ll just start eating huge sticks of butter and watching hockey. Maybe they also go from Herodotus and Ondaatje to Twilight.

MS: I suspect yes, when you’re part of a couple you have less time for reading. The other things you mentioned are dating behaviours, like keeping yourself in shape, it’s in your self-interest as a single person to do that. Whereas reading, I think that’s just a practical matter in terms of time.

3 responses to “Alikewise – Revenge of the Book Nerds”