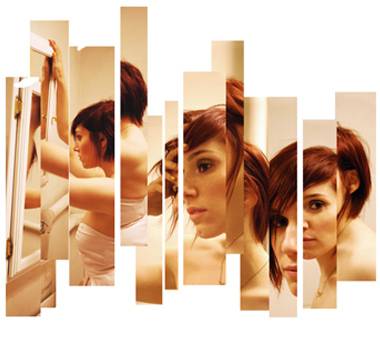 Julie Potash, aka Hesta Prynn, is one of those “accidental” musicians. As one-third of Long Island girl rap group Northern State, she was in on what started as a joke but soon became a band with real potential.

An EP, two albums and multiple tours, including ones with Tegan and Sara, came easily to the trio until, a couple of years ago, Hesta, Spero and Sprout quietly decided to, at least temporarily, walk away from Northern State. It was so quiet that, when @hestaprynnmusic started following us on Twitter, we were all like, “Hey, isn’t that THE Hesta Prynn from Northern State? Whatever happened to that band, anyway?” 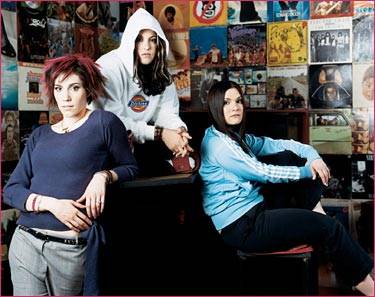 But, encouraged by the Sara half of Tegan and Sara, Potash has kept writing and recording, and posting the results – catchy dance-pop like “Le Coq Aux Folles”, which uses Blondie‘s “Rapture” as a starting point – on her Myspace page and readying a full-length album for release next year.

When we reached her at home in New York, just a week-and-a-half before Christmas, Potash/Hesta Prynn was in the midst of deciding on management and a label between studio sessions to finish the record. Also, she was sporting a black eye. Which she refused to explain to our satisfaction…

Shawn Conner: I believe this is the first interview that we’ve set up entirely through Twitter. Are you finding social networking helpful?

Hesta Prynn: It’s funny, I have a Myspace, I have a Tumblr, I have a Facebook, I have all the pages you’re supposed to have. But something about the immediacy of Twitter… This is the way I think. I’m not the kind of person who wants to sit down and write a whole blog post, even though I do that. I’m the person who has a thought and wants to scribble it out on my way to somewhere else. But it’s been really fun because I have a lot of friends of friends who are in bands, and photographers, all different people I know through other musicians and artists, and Twitter is a way of getting in touch with everyone. And it’s a way for you to talk directly to your fans, in a low-key kind of way.

SC: Some people just don’t seem to get it, they see it as purely a promotional thing, but you’re not just Tweeting about your career.

HP: If you’re just going to post about your shows or whatever you’re selling, you can do that on any other site. The thing about Twitter is… you know, I like to watch reality TV and I like to Twitter about that. And a lot of the time I’m somewhere where I feel like I’m on a reality-TV show and I’m like, Can I get a witness? And I can Twitter about that, in the moment.

SC: What about this new show, Jersey Shore?

HP: Of course I’m watching Jersey Shore! It’s pretty hardcore. I heard it might be going off the air, because the Italian-American Defamation League [Unico] wants it taken off the air because it’s like the worst thing ever.

SC: What would the Italian-American Defamation do without cable?

SC: Get it out to the people. So what’s been happening with Northern State?

HP: I’m really just focusing on my own stuff right now. We played a show in Missouri in Halloween, at a frat party kind of thing, which was fun. We hadn’t played before that in a year and a half. We’re basically on an indefinite hiatus. Which is okay, we’re still friends, we see each other all the time. I’m seeing those girls Friday night. But I think we all had other things we wanted to do in our lives. For me, I feel like a band that started as a joke turned into a career, and I really wanted to do something musically different, that reflects me more in a way I couldn’t do in that band.

SC: I guess in the spirit of starting as a joke, you didn’t send out a mass email or anything publicizing the band’s dissolution?

HP: I think it was also because, it’s kind of like maybe when you’re breaking up with somebody and you’re both, maybe it’s coming and you don’t feel the need to have that conversation. Maybe you stop calling… I think that’s a little bit of how it happened. Northern State was my first band, and we took it pretty far. We just kind of naturally moved on to other things.

SC: There are so many people just dying to be musicians, to have a music career. I always find it interesting when someone just happens to find him or herself writing songs and making records.

HP: I always wanted to be a performer, it was always about the performance for me before the music. I played piano forever, but I never incorporated it into Northern State until Can I Keep this Pen? [Northern State’s second album]. It wasn’t ever my dream to be a girl rapper. I loved music and I loved hip-hop and I loved the Beastie Boys and we came up with a fun idea. I think it’s possible to say in the beginning, I was 20 years old and I had really big dreams, and I think Northern State was a little bit of the vehicle for those. As time went on, and I’mÂ  proud of a lot of things we did, but I turned into a proper songwriter. I stopped acting. And the music was starting to feel a little dated to me, and to not feel like the way I wanted to express myself as a musician. Which is what I was, after that many years.

SC: So at the moment you have an EP?

HP: I have an EP which I’m just burning and selling myself, but it’s just kind of a stopgap measure while I finish my album. I started writing the songs while on tour with Tegan & Sara and Sara Quin was really supportive of me, she was like “What are you working on? This is really really good, you should do something with this.” Every time she’d come to New York she’d want to hear the demos, she’d be like, “these demos better be done by the time I get back.” I was kind of nervous to play them for her. And she really fell in love with them, she was like, “This is really awesome, I want to work on this record with you.”

HP: It’s funny, I was just writing a blog post: “Building the Team, AKA Who Gets to Be the RZA”. Chuck Brody, who’s been my long-term collaborator, I’m writing the songs with him, he’s definitely the producer. And then I have this other friend in LA who’s in a bunch of bands and he’s co-producing. But then Sara’s kind of overseeing the whole thing but that’s not really producing.

I would say I’m obviously the RZA [Wu-Tang Clan boss], because these are all my ideas and everything we’re doing is coming out of my brain–the songs, the look we’re going to go for for the live show next year. I’m lucky I have a support system and team to help me realize my vision.

SC: And so you’re looking for management now?

HP: Well I’ve been having management meetings since just before Thanksgiving. And we’re starting to talk to some labels. They’ve kind of been talking to me since I put those songs on Myspace, and we sold out our shows in London, so all these London labels have also been getting in touch, which is really exciting, but I’ve been holding off on it because I want to finish the record on my own. I don’t want to get bogged down in the business of it. There are plenty of people involved in the music, I don’t need a bunch of business people up in the mix too.

SC: And what about this black eye?

SC: I think you got into it with the RZA. On the streets of Brooklyn. Outside of a bar.

HP: That’s 90 per cent true. The only part that isn’t true is that it was actually Staten Island.

One response to “Hesta Prynn”