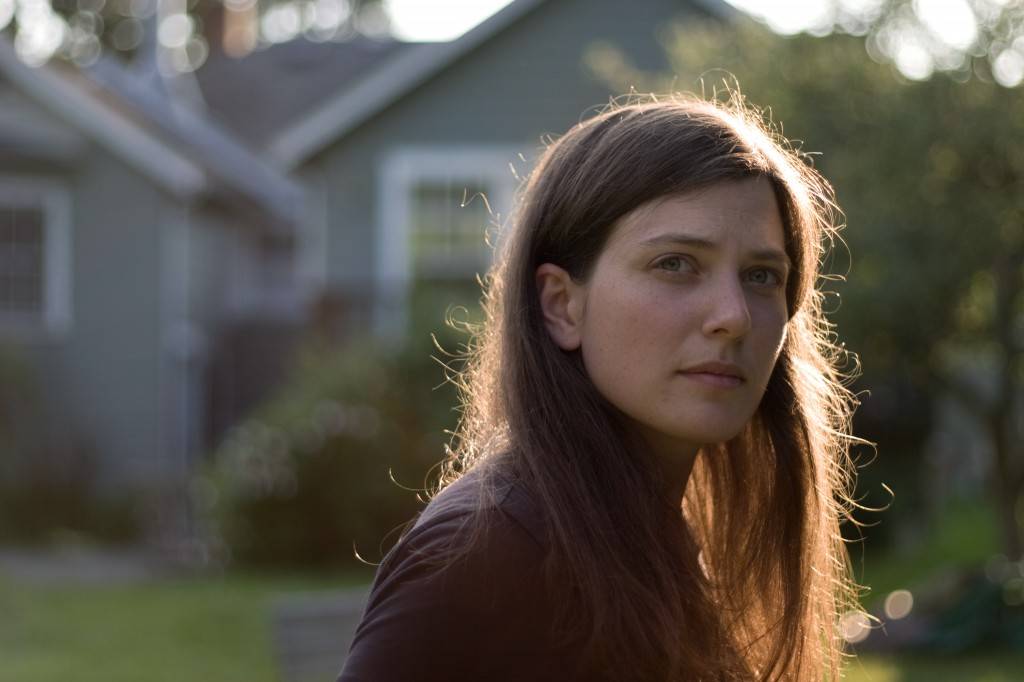 Shannon Stephens went into semi-retirement after the release of her 2000 full-length album and its follow-up EP, How I Got Away. And, except for the 2006 re-release of the self-titled debut on Asthmatic Kitty Stephens pretty much fell off the music-making map.

But last year there were stirrings in her corner of the Pacific Northwest, where the singer lives with her husband and their four-year-old daughter, and where she tends an ever-expanding garden. Bonnie “Prince” Billy, Will Oldham to his mom, recorded a Stephens song (“I’ll Be Glad”) for his 2008 album Lie Down in the Light, and that lit a fire under Stephens. On Sept. 8, Asthmatic Kitty –  the label co-owned by Sufjan Stevens, her bandmate (along with Matt Haseltine and Jamie Kempkers) in the ’90s group Marzuki – released The Breadwinner, her second album. It’s a perfectly lovely and remarkably naked look at staying loving and in love during heavy weather. Surely by accident, it’s a record that seems made for these times, but songs like “Come To My Table” and “In the Summer In the Heat” are so universal and timeless-sounding you could swear you’ve heard them before.

I reached Shannon Stephens at home a couple of weeks before her CD release party at Shadowland in Seattle, Aug. 29.

Shannon Stephens: The garden is huge and it’s producing more than I can manage right now. I am completely overwhelmed with zucchini. I wish I had time to process this stuff but it’s just piling up.

SC: Is this like a subsistence garden, do you get a lot of your food from it?

SS: Yeah, we’re getting a large portion from the garden right now, and we’re not spending much on groceries. But we still get all our legumes and greens from the store. But we grow almost all of our own vegetables and fruit. We’ve done this for about six years. We just started with tomatoes and peppers and had a blast, and we’ve expanded every year since. And this spring we moved onto a property that had fruit trees. So this time we get to make all kinds of jam. It’s a lot of work but once you’ve had homemade tomato sauce you can’t buy the canned stuff anymore.

SC: That could be some great merchandising for you, Shannon Stephens’ Homemade Jams. You could sell them on tour.

SC: People love that kind of stuff. So how have you worked music back into the daily fabric of your life?

SS: I really took a long pause, several years long. I was feeling really discouraged about music for awhile. Also, I was just enjoying married life and nesting and stuff like that. And then, a couple years after my daughter was born, my husband and I felt it was time for me to do something just for myself, and I started writing songs again, trying to learn to play and sing again. It’s been a long journey from that point – gosh, two-and-a-half years since I started writing again. I’m finally starting to feel like my skills are back. So we just try to work it in. An hour or two a day is really all we can squeeze in, for me to go downstairs and play my guitar.

SC: When you say you felt your skills coming back, do you mean singing and playing or songwriting?

SS: Both. The first few songs I wrote after my break were just awful. I look back on those and think, “I can’t believe I shared those with people.” I recorded them and I sent them to Asthmatic Kitty and I was like, [excited voice] “What do you guys think?” I listen to those now and I’m just so embarrassed. Also, playing and singing. I was completely rusty and my voice was really week.

SC: What kind of response did you get from Asthmatic Kitty?

SS: I got together with Sufjan, and he said, “You know, some of the songs on that demo were really great and others were just really weird.” I was like, “Is that a compliment, or…?”

SC: What did you learn from being in Marzuki?

SS: I learned so much. I was so young at the time and had so much to learn.

SC: You guys were attending university in Michigan at the time right?

SS: Yeah. We took a year off in the middle of our college studies to go to New Jersey and record and try to make it in New York. So I learned a lot about just living with people who disagree with me, and also how to allow others into the songwriting process, and not be so possessive of my ideas and be open to someone else’s. That was a very hard struggle for me, being open to people saying, “What if we did it this way?” And I’d say “No, this is my song, I wrote this. We’re going to do it this way.” I also learned how to record an album, ‘cos we did it twice.

SC: So you were writing songs on your own before Marzuki formed?

SS: Yeah I was, and a lot of them were really cheesy. And one of the things I feel the guys in the band gifted me with was a cheese-filter. Like they would listen to a song and be like, “Oh, I really can’t get behind that song. Can you work on those lyrics a little bit more.” Or just come right out and say, “that was cheesy.” So I felt challenged to write lyrics with a little more depth, that had a little more meaning.”

SC: The songs on the new album seem very unified, like they were written in a short period of time…?

SS: Well, “The One Who Sees Me” I wrote even before I took a break.

SC: The song that really gets me is “Come to My Table”, and the lines “We’re going to work until we die.” And not just that one but a few of the songs seem like they were the product of sleepless nights, worrying about paying the bills.

SS: Yeah. Yeah; uhm, my husband and I are landscapers. And we made a choice when our daughter was born to try and spend as much time with her as possible. So we work hard and also we run our business, so we’re in the office a lot. As a result, we’ve been hovering on the brink of catastrophe for years now. Those hard choices, those cause-and-effect things we do in life–I never really understood the concept behind them. The concept that, if you don’t get a college degree that’s useful, well then you will be struggling. I never put that together until the last couple of years and I realized, “Okay, so life is hard, and it’s going to be hard. It’s too late for us to go back to school and we’re just going to keep working this hard for the foreseeable future.” It’s been a hard lesson to learn.

SC: How is life different now than you thought it would be ten years ago?

SS: I thought I was upwardly mobile. Most people in our generation had thought that about themselves, because they saw their parents with nice things, and back in our parents’ day, you could have just one breadwinner per household. These days it’s not affordable to do that. I thought by the time I hit my 30s I’d be a homeowner, I’d have some really sweet pieces of furniture. And I didn’t really have to do anything to acquire that except be my fabulous self.

SC: You thought it would be handed to you.

SS: Yeah. And it’s been a real surprise.

SC: But you’ve got the garden.

SS: And that I feel grounds me.

SC: Did you know about the Bonnie “Prince” Billy cover before that happened, or was that a surprise?

SS: I heard about it once recording was finished and the album was about to come out. That’s when Will got in touch with me and told me he’d covered the song.

SC: That must have spurred you on a little bit.

SS: It did. It was probably way more encouraging than he thought it would be, because I needed just a little push at that time, I just needed someone to say “I believe in what you’re doing.” And when he covered that song, how better to say that, than to cover someone’s song?

SC: You’re launching the CD at the end of the month in Seattle. How connected are you to the music scene there?

SS: Not even remotely. I dropped off the scene and everyone else kept moving forward and we really lost touch. So I’m trying to create a network from scratch right now, just find out who’s out here and doing stuff I like.

SC: ‘Cos you were working with people like Damien Jurado when you first move out there, right?

SS: Well, I wasn’t really working with Damien, but I did open for him once. I was a small fry, and now I get to be a small fry again.

SC: What took you from Michigan to Seattle?

SS: I was never happy in Michigan. lived there [Holland, MI] for eight years but I grew up mostly in the Southwest. Anyway, I was graduating from college, and had just felt pent-up and repressed for years and knew I wanted to get out of there but didn’t know where I wanted to go. Then I met Rose Thomas and Dave Bazan [Pedro the Lion] and some other people from the music scene out here, and made some friends, you know, and people were saying come out to Seattle, just come out for the summer, we’ll have a blast. So I told my mom I was going to go to Seattle for the summer and she said, “Shannon, just admit it, you’re moving there.” So I did, and somehow it worked out. Found a place to live, got a job, met my husband.

SC: And that was a period of your life where you were following the advice in a book, I Kissed Dating Goodbye.

SS: [laughs] Man, you did dig around!

SC: Everything comes back to haunt you.

SS: I guess for me it was a freeing book. I was at a point where I’d just invested a year-and-a-half in a relationship that turned out to be nothing, and I was ready to enjoy just being single. So that book sort of empowered me to do so. I didn’t have to date too much more.

SC: It’s funny, because a 2000 interview Sufjan did with you, he asks – I think you were about to get married at the time – “Will you now write songs about homemaking and kneading dough?” Which is kind of ironic, considering the album is called The Breadwinner.

SC: I thought so. Anyway, I think that’s all my questions. You’re back in the music scene. How does it feel?

SS: It feels exciting. And it feels different this time. I feel different, like I have more of a grasp of what it’s going to take. I’m excited to do the work. I’m back on the scene with my husband as my partner in all of this. So I don’t feel alone and overwhelmed.