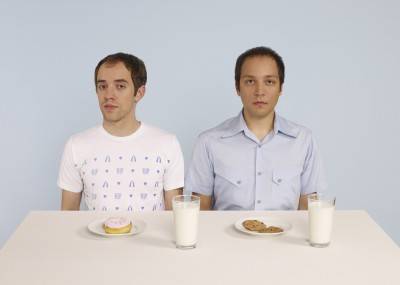 Someone, or something  – maybe it was The Onion – picked the Helio Sequence‘s Keep Your Eyes Ahead as one of last year’s best albums.

The only problem was that, after I downloaded the thing, I couldn’t get past the first song, “Lately”. It was just too good, an epic of denial in the face of emotional catastrophe. But there’s more where that came from, as I discovered when I listened to the whole thing in preparation for my phone chat with the Portland band’s singer/guitarist, Brandon Summers. 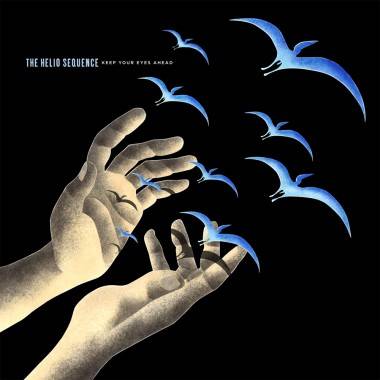 Shawn Conner: The new album, “Lately” especially, has all the bigness of U2 and Bruce Springsteen. Are those names scary? Do you worry about coming across as cheesy?

Brandon Summers: No. It’s funny you mention the word “cheesy” because, over the years – I don’t even care what’s cheesy anymore. That’s one of the inhibiting factors of anybody getting into music, or getting to the core of any music, is if they’re afraid of listening to something or afraid something can be cheesy and not willing to get close to something. There are aspects of U2 and Bruce Springsteen that are over the top, but you’ve got to realize they’re speaking to an audience that’s gigantic. So they’re speaking a lot in universals.

And universals can sound trite a lot of times. But they’re universal because they’re true. I think U2 and Bruce Springsteen are amazing. A lot of Keep Your Eyes Ahead was me coming to terms with music like that, and not being afraid of it. Lately I’ve been hugely into Frank Sinatra. And a lot of people might say oh it’s so old and sappy and sentimental. But it’s not. It’s unbelievably deep and amazing.

SC: He is Sinatra, though. It’s like that scene in This is Spinal Tap, where the limo driver tries to lecture the band in the backseat, “When you’ve lived and loved like Sinatra has,” and they turn him off by closing the window.

BS: I’ve always known of Sinatra. But I was reading this book about recording studios – both Benjamin [Weikel, the drumming half of the Portland, OR duo] and I are really into that kind of stuff – and it was about the great recording studios in history, and there was a section devoted to Capitol Records, and the studios they used. In particular they were talking about that record Frank Sinatra Sings for Only the Lonely, and I went out and got that and it blew my mind.

Okay, so there’s not only the swaggering side of Sinatra, there’s this really deep side where he’s able to get so deep into a song – I don’t even know another singer that can get that deep into a song. From there I got all the Nelson Riddle stuff, In the Wee Small Hours, and the Billy Mays stuff.

SC: I like that, the idea of “going deep” into a song. Is that a lost art?

BS. I grapple with that feeling every time I sit down to write a song. It takes a little while to get into any song. And people are afraid to come across as cheese-y – “If I expose myself too much maybe people are going to think that’s corny.” So I think a lot of people are always trying to cover their tracks, or trying to be clever where they should be direct. And there’s a definite fine line between being direct and overdoing it. It’s a very, very subtle thing. And it’s different for every person, for every listener.

SC: “Lately” is one of those songs that almost doesn’t need lyrics. You hear the melody and you know it emotionally.

BS: That song comes a lot from certain songs, like that Bob Dylan song “Mama You’ve Been On My Mind”, where there’s a counterpoint in what’s being said lyrically and what’s meant. And it’s not irony. That’s an easy way to get away with, being ironic. It’s a lot more intricate than irony.

Or there’s that Frank Sinatra song, “I Get Along Without You Very Well” where he spends the whole time saying, “I get along without you very well. Except in spring when this happens, and this happens.” It ties in with that tradition – it’s not conscious, like you sit down and say I want to write a song like this. But it’s interesting when you hit upon these things, that you find they are really universal. It makes me think you don’t actually write a song, it comes to you and you’re lucky to grab it out of the air.

SC: Now, aren’t there some bars in Portland where, if you say you like Springsteen and U2, you’ll get beaten up?

BS: Portland’s very hip, but people really do like that stuff. But in the context of being around other people, they might not admit it. They’ll make an ironic comment like, “Oh yeah, Bono, trying to save the world. Hah!” but they’re thinking, Well I just laughed that off. I don’t want anyone to know I like The Joshua Tree.