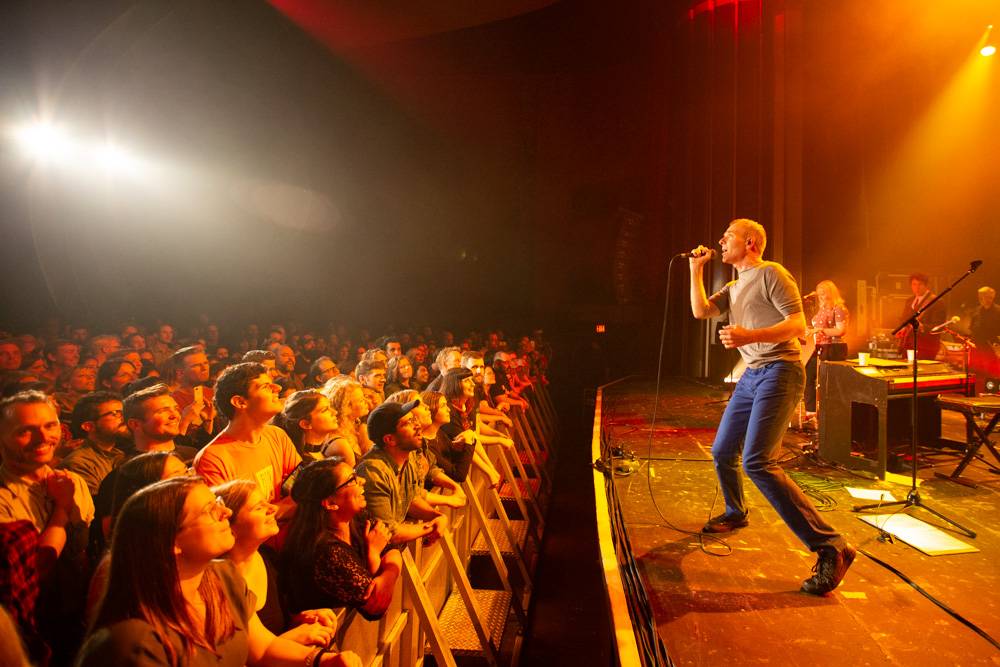 Photos–Japanese Breakfast opening for Belle and Sebastian at the Vogue Theatre, Vancouver

It was impossible to keep your eyes off the frontwoman, whose effervescent energy managed to radiate across the entire venue. Her performance was both athletic and theatrical as she bounced across the stage and sang with unrestrained passion. “This is the first night I’m performing sober,” Zauner admitted with a grin.

She kept smiling throughout, even during melancholic numbers like “The Body is a Blade.” The song was one of many that the band played from their sophomore record, 2017’s Soft Sounds from Another Planet. Japanese Breakfast’s stage presence was powerful; it’s only a matter of time before the group starts headlining large shows of their own.

Putting audience at ease, if not solving human problems

Speaking of Murdoch, the lead singer made the sizeable Vogue Theatre seem intimate. But it wasn’t because of the way he sang songs like “We Rule the School” in his soft, low voice. Rather, it was the moments in-between songs, when conversation flowed out of him with ease. Whether addressing his bandmates or the crowd, Murdoch spoke to everyone in a familiar manner. Sincere and sometimes humourous, the banter added to the light-hearted atmosphere of the evening.

Murdoch shared vocal duties with keyboardist/violinist Sarah Martin and guitarist Stevie Jackson. Whereas Martin played the flute and sung sweetly on “I Can See Your Future,” Jackson kept things upbeat with “The Wrong Girl.” Like Murdoch, Jackson was cheerful, balancing effortless guitar playing with nerdy dance moves. At times, some vocal harmonies were difficult to hear, but the instrumentation was spot on. With the myriad instruments used–including recorders, a cello, bongos and a harmonica–the band managed to deliver an ambitious but tight set.

The return of The Boy With the Arab Strap

Judging by the crowd’s gleeful response, the highpoint of the night was the 1998 hit, “The Boy with the Arab Strap.” In what has become a tradition during the band’s live performances, Murdoch pulled some audience members onstage to dance. The spectacle seemed like a flashy gimmick at first. But as the few chosen showgoers cut loose with the band, it became clear that Murdoch wanted to create a friendly, inclusive environment. Those same people gave it their all, and by the end of the number, they descended the stage sweaty and smiling.