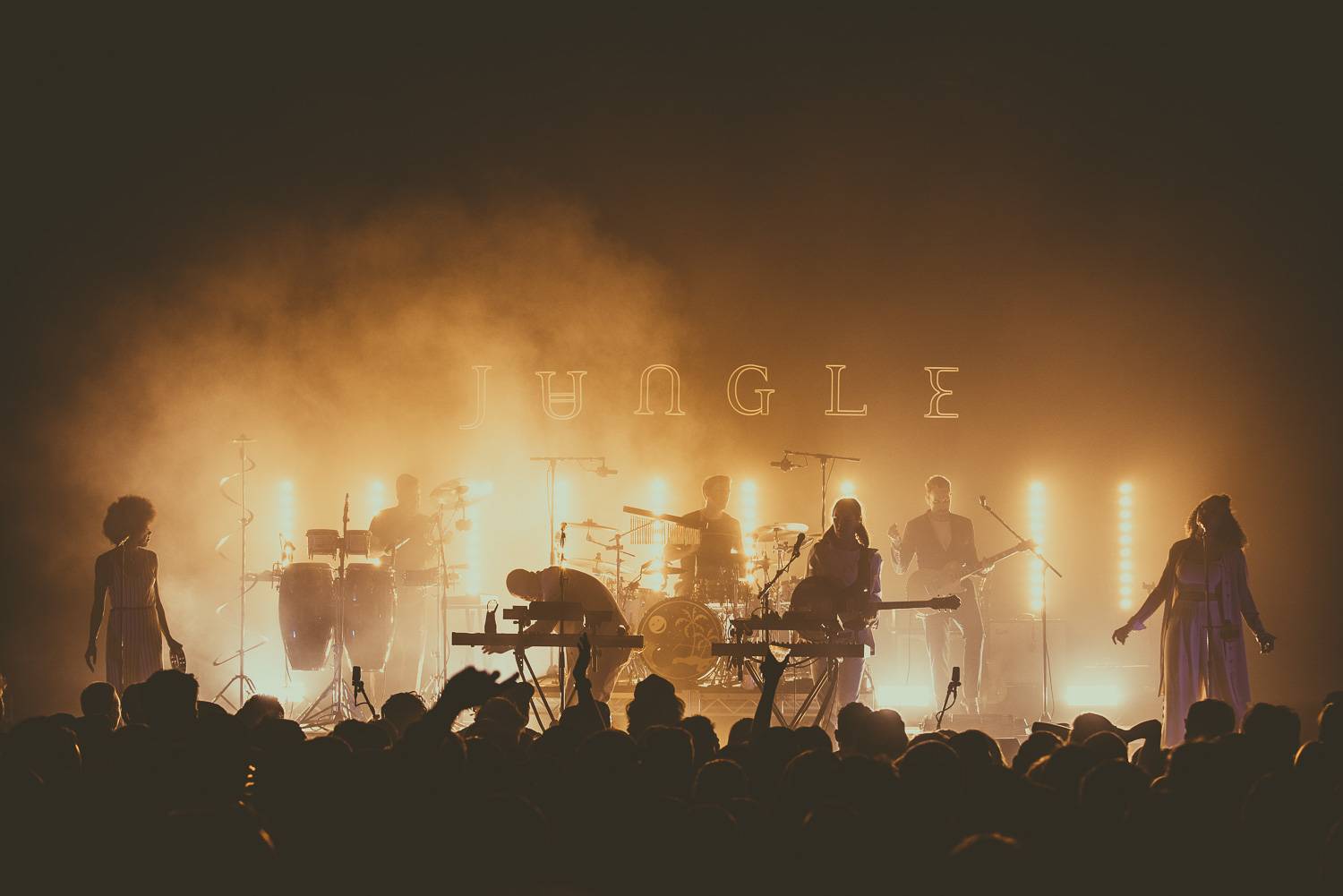 Review and photos–Jungle at the Vogue, Vancouver, April 3 2018

After an almost four year hiatus, British collective Jungle are back, earning critical acclaim and getting shortlisted for England’s prestigious Mercury prize. Despite rumors of a second album every year since their debut album dropped in 2014, it has been radio silence from the group. Until now. That long-awaited sophomore LP is still yet to be announced, but a tour can only mean one thing–the album must be just around the corner.

Vancouver had the privilege of being the first stop on their three-month tour, with the group playing to a packed house at The Vogue on Tuesday night. The audience was treated to no less than six new tracks plus almost everything from their album. The band began their set with “Smile”, a new song that shares much of its DNA with that classic Jungle sound: funked-up beats and falsetto crooning that is part Bee Gees, part Funkadelic and all groove. Older songs like “Julia”, “Platoon” and “Accelerate” were given a more-or-less faithful rendition, with a slightly higher BPM to keep the groove going. The most exciting part was when they debuted new material, which showed the band expanding their sonic palette beyond the funk/soul hybrid into slower tempos and alternate vocal stylings.

Jungle has a reputation for being a great live band, and they lived up to it. Founders (and childhood friends) Tom Macfarland and Josh Lloyd-Watson were the spirit animals of the group, with Lloyd-Watson in particular hyping the crowd and really getting into it. They were joined by Rudi Salmon and Nat Zinga on vocals, Dominic Whalley on percussion, George Day on drums and Fraser MacColl on bass/guitar.

Technically, the band was super-tight. From the way they played, one would never have known that this was their first night on tour. Unfortunately the lights were all pointing out toward the crowd from behind the band, so it was hard to get a good look at what was happening on-stage. Crowd interaction was minimal and almost exclusively handled by Lloyd-Watson. At one point he thanked the person who graffitied “Welcome back Jungle” with a big heart around it on the rear door of the venue which got a big cheer.

The band finished the night with a spectacular string of songs, starting with a new track “Beat 54”. Its summery disco vibe (complete with sweeping strings) was another surprising change of vibe from their older material. It was one of the best songs performed, and lent even more legitimacy to the hype around their new album. “Beat 54” segued into “Drops”, which was given a more energetic workout than the studio version, at which point there was only one song left to play–“Busy Earnin’”. The track that arguably put them on the map, the song created a huge buzz with its iconic video. Appearances in video games and a Toyota ad as recently as last year has maintained its ubiquity in the collective consciousness. The song’s unmistakable horn riff rang out like an air siren, forcing even the stubborn punters on the mezzanine to their feet.

Opening for Jungle was Omar Apollo, a soulful singer/songwriter from Indiana. He has an very emotive voice and also a knack for wrapping it around catchy melodies. His on-stage setup was minimal – just him, a guitar, his drummer and a laptop, but the empty spaces in the songs let his voice take the spotlight. Check him out on soundcloud.