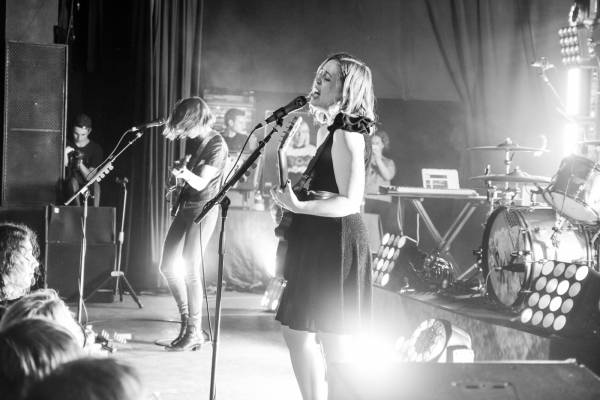 Sleater-Kinney at the Commodore Ballroom, Vancouver, May 6 2015. Pavel Boiko photo.

Photos -Â Sleater-Kinney at the Commodore Ballroom, Vancouver, May 6 2015

Sleater-Kinney in Vancouver on Wednesday night. The Portland band is on a tour for its most recent album, No Cities Left to Love. Seattle’s THEEsatisfaction opened.

According to the Vancouver Sun‘s Francois MarchandÂ in a review on his blog Awesome Sound, “Nearly 10 years after they disbanded, Carrie Brownstein, Corin Tucker and Janet Weiss remain a force to be reckoned with. The dual guitar/vocal attack of Brownstein and Tucker (augmented by an extra multi-instrumentalist on some of the more layered songs) was something to behold, while Weiss pounded her drums like a woman possessed.”

More Sleater-Kinney at the Commodore photos: