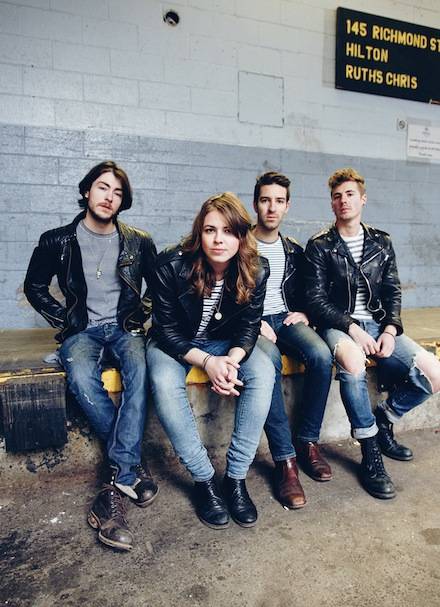 Tell that to The Mohrs. Fronted by whiskey-and-ginger-voiced Jackie Mohr, the band is on a tour with Calgary’s HighKicks that is taking them deep into the heartland of this vastÂ nation, intoÂ the parking lots and onto the stages ofÂ the Flying Steamshovel in Rossland and the Dirty Jersey in Kamloops.

But that’s what you gotta do when you’re a rock band in an FKA TwigsÂ world. Fronted by Winnipeg natives Mohr and guitarist Marc Girardin, the group is touring in support of their just-released debut, Kings of Nowhere.

The Runaways and Heart are obvious touchstones, and Mohr’s love for AC/DCÂ isÂ tucked away in the songs’ riffageÂ as well.

Produced by Hawksley Workman, the album captures the band searching forÂ its voice, and on its bestÂ songs – “Better”, “Youth”, the sugar high that is “Cassette Tape” – finding it. (Look for some stealth hooks in other tracks, like “Won’t Be Going Home”Â and the title song.) And you just know that they bring it live.

Which is why you’ll see them when they play the Biltmore Cabaret in Vancouver Thursday night (March 26). OrÂ when they play Lucky in VictoriaÂ March 24, the Queens in Nanaimo March 25, or, yes, the Dirty Jersey in Kamloops March 28… (More tour dates at theMohrsBand.com) 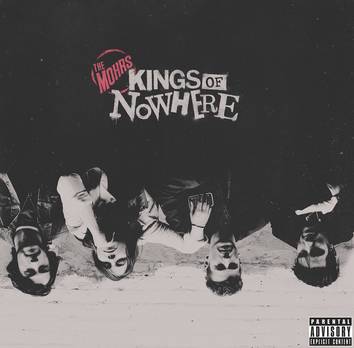 JM: Light Organ [the label releasing Kings of Nowhere] built up a brand-new office. JonathanÂ [Simkin, label head and lawyer for Nickelback] has been trying to get us in here for awhile now.Â He’s built a bunch of studio rooms here. No one was using it, so I said Hey, can we just pop in and out for a few days? And he said “No problem.”

JM: For purposes of this interview, let’s say yes! The last time we were out here we were supposed to meet ChadÂ but I actually haven’t met him yet.Â I’m hoping too. Although,Â we’re working on his [mixing] board, it’s this crazy board that “Livin’ on a Prayer” was tracked on, and Nickelback’s “How You Remind Me”.Â A ton of bands have worked on this board.

JM: Yeah, we just released Kings of Nowhere on February 10th. And it’s been so exciting for us to have that record out. But we’ve been sitting on it for awhile, a couple of years actually.Â There are a lot of ideas that we want to get down. And then I think it’s usÂ wanting to stay on top of things and always be writing and beÂ creative. It’s kind of like a muscle and we are gearing up to write the second record and track it probably sometime late in the summer.

I don’t like doing covers unless it feels like we do them really well. A long time ago we talked about doing the Yeah Yeah Yeahs‘ “Maps”, we did it at one of our earlier showsÂ a couple of years back and it’s just stuck.Â It’s so much fun to play. Not that we outdo them in any wayÂ but we do our own thing to it.

JM: I feel the same way. I have nothing against any kind of music at all. But I was at the same point when we started it. I know that there are some women out there,Â and people out there in general who are doing the rock thing, but that’s where my heart always lay. I’m hopingÂ it’s coming back.

JM: When I first started playing in bandsÂ IÂ really only listened to male singers. I really like ’90s rock, likeÂ Our Lady PeaceÂ was one of the first bands I got into.Big Wreck. AndÂ Rolling Stones, Mick Jagger I really really loved. It’s only from my early twentiesÂ until now that I’ve been listening to female singers. Chrissie Hynde and Stevie NicksÂ are huge.

SC: Do you rememberÂ the first music you purchased on your own?

JM: Yep. Sure do. I picked up at a garage sale at my cottage, it was a cassette tape, The Razors Edge [1990] by AC/DC. I listened to it the wholeÂ summer with my cousin. “Thunderstruck” was my favourite, favourite track. It blew my frickin’ mind.

It was aroundÂ that time that I picked up the guitar because a friend of mine out at the cottage started playing this fire-red Ibanez. After that summer I went home and my dad found me this old Fender Bullet that was the same colour and I started taking lessons. I was about 13.

SC: Black leather, jean jackets, T-shirts – you guys rock the rock look. Who’sÂ got the best collection of t-shirts in the band?

JM: I would say that it’s me, by far. But recently my guitar player and I were shopping – I’m not going to say I made him by it, but he just bought an insanely cool Pink Floyd shirt from nineteen-seventy-something, seventy-eight.Â He spent seventy dollars on it. So maybe Marc now.

SC: WhoseÂ idea was it to make a rather provocative video forÂ “Better”?

JM: The director’s. We worked withÂ some friends of mine, Aly Pankiw,Â the director, and production company wasÂ Young Astronauts.Â They’ve always been supportive of the band, and they wereÂ fully on board. Then weÂ read that treatment from Aly, so it was her idea.

The woman who plays the lead, apart from me, is a burlesque dancer from Toronto, Laura Desiree, who I’m friends with.Â I asked her to be in the video because when I read the treatment I said, Hey, we need a bombshell who can carry this role. I couldn’t think of any one better than Laura to do it.

SC:Â You mentioned that you’ve been to Vancouver before. Have you played here?

JM: We have. The only other tour we’ve done is outÂ west, around this time last year when we were supporting Electric SixÂ at Venue.

SC: You’re playing deep in B.C., places like the Flying SteamshovelÂ in Rossland and the Dirty Jersey in Kamloops.

JM: This is a tour where we’re hitting a lot of markets. I think it’s partly due to theÂ High KicksÂ boys, they have a lot of fans in these small towns.

SC: I hope you can get the same reception in Vancouver.Â I feel like allÂ the rock ‘n’ roll fans have moved to theÂ suburbs.

JM: That’s what it feels like. But we get aÂ mix.Â When we played in Rossland it was a bunch of bikers. I didn’t know how that was going to go, but they loved us.

SC: For me, the poppiest song on the album is “Cassette Tape”. Do you think that’s the direction you’ll go in for the next record, or will you be gettingÂ harder?

JM: It’s something we’ve thought about. I wasn’t sure IÂ wanted it on the record, but live it comes off a lotÂ heavier, and it’s one of my favouriteÂ songs to play now.Â But it kind of wasÂ more of a fun, one-off kind of thing. Which we may do again.

But whenÂ we think of the second record it’s definitely going in a heavier direction, closer to what you see onstage.Â Taking awayÂ the bells and whistles, more stripped-down rock, cutting it back to the songwriting andÂ heavy sound.