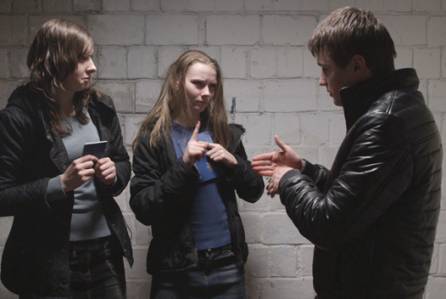 You may have been hearing a lot about Ukrainian filmÂ The Tribe. If you haven’t, you will. Either way, you owe it to yourself to see this incredible movie, which closesÂ this year’s Rio Grind Film Festival.

Why Don’t You Play in Hell?Â (7 p.m.) – Never mind the title, which implies this is a grisly gore-party. Instead, this Japanese import is a fast-paced, fun and mostly absurd tale of a group of amateur filmmakers getting mixed up with the yakuza. Directed by Sion Sono (Suicide Club), itÂ took home the People’s Choice Award in the Midnight Madness section at TIFF 2013.

It Follows (9:30) -Â David Robert Mitchell‘s fright-fest isn’t always logical but it’s almost always effective in its telling ofÂ the story of a sexually-transmitted haunting. The definition of doing a lot with a little, It Follows is perfect late-night movie fodder for a group of friends. And remember, it’s the Rio, so alcohol is served.

Starry Eyes (9:30) – From the Rio press release: “Directors Kevin KÃ¶lsch and Dennis WidmyerÂ offer a fresh take on psychological body horror in Starry Eyes, a smart, dark and sexy film that’s proven itself as one of this year’s biggest festival favourites the world over (Official Selection SXSW, Fantasia Film Fest, Frightfest UK and more). Alexandra Essoe (in a breakthrough performance) stars as Sarah Walker, a hopeful young starlet who uncovers the ominous origins of the Hollywood elite and enters into a deadly agreement in exchange for fame and fortune.”

Short Films (1 pm) – Horror on a Saturday afternoon! ShortÂ films from Vancouver and around the world are presented for your edification and amusement.

Berkshire County (5 pm) – Canadian horror! Following its World Premiere at Shriekfest in Los Angeles, director Audrey Cummings made history as the first woman in the 14-year history of that fest to take home the Grand Jury Prize for Best Horror Feature (it’s also the first Canadian film to win since 2007). Â Snipe contributor Michael Nevada writes: “Alysa King stars as Kylie Winters, a self-loathing teen, tasked with babysitting two children in their isolated mansion on Halloween. Three people wearing pig masks, however, invade the house and Kylie must escape. The film is yet another take on the “Babysitter and the Man Upstairs” urban legend seen in horror classics like Black Christmas (1974) and When a Stranger Calls (1979). The story is a bit uninspiring at times, with a twist ending telegrammed a mile away. But the cinematography, in particular a gorgeous aerial shot in the beginning, and a great performance by King make Berkshire County an enjoyable film to check out this Halloween.” Following the screening, director Cummings (via Skype) and writer Chris Gamble (in person, all the way from Yellowknife!) willÂ join the Rio audience for a Q-and-A.

Lost Soul: The Doomed Journey of Richard Stanley’s Island of Dr. MoreauÂ (7:30) – What went wrong during the filming of the 1996 remake of The Island of Dr. Moreau (you know, the one starring Val Kilmer and Marlon Brando)? Everything! David Gregory‘s documentary tells all (or at least most).

These Final Hours (4 p.m.) – If you had just a fewÂ hours left to live, how would you spend them? Arguing with your mom? That’s Zak Hilditch‘s vision of the apocalypse. Unfortunately, the Australian director doesn’t play his ideas for laughs, which is about all they deserve. But don’t take our word for it -Â These Final HoursÂ was selected to be screened as part of the Director’s Fortnight Section of the 2014 Cannes Film Festival, andÂ The Guardian called it “AÂ symbolic work that fires from multiple cannons.” Yeah, sploodge cannons.

Feed the Gods (6 p.m.) – More Canuck horror, with cast and crew in attendance! And a World Premiere, to boot. From the Rio press release:Â “Shot in and around Vancouver, Braden Croft‘s (Hemorrhage) latest is about two brothers (Shawn Roberts, Resident Evil and Tyler Johnston, TV’s Supernatural) who return to a small mountain town in search of their long-lost parents, only to discover that the place has a monstrous taste for tourists.

The Tribe (8 p.m.) -Â This is it, the one to see (if you can only see one film at Rio Grind). Myroslav Slaboshpytskiy’s unforgettable filmÂ garnered three Critics’ Week awards at Cannes, including the Grand Prix. The Tribe contains no spoken dialogue, no subtitles, and is set entirely in the world of the deaf, focusing on a gang of deaf-mute students at a Ukrainian boarding school.