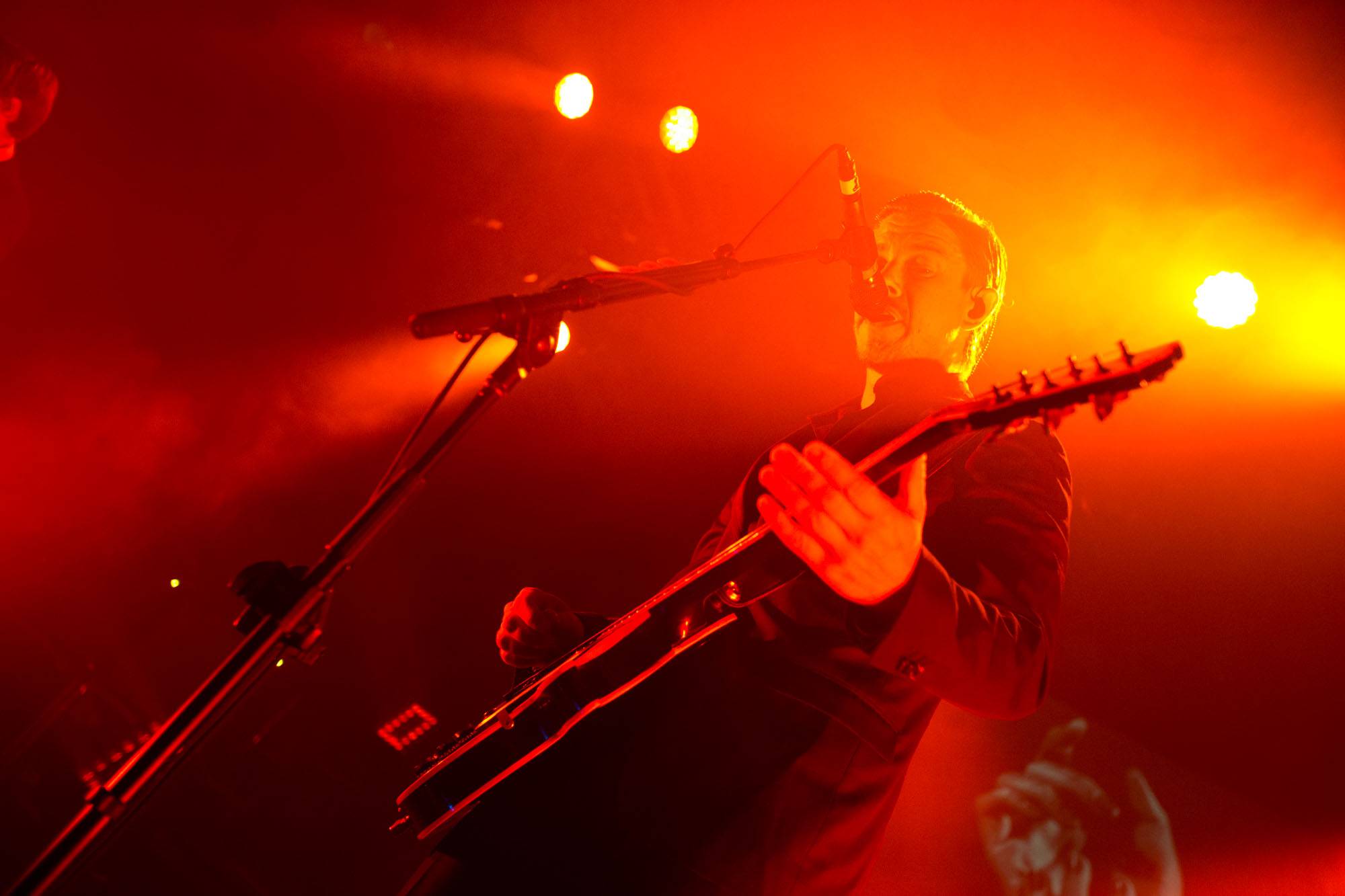 As Interpol‘s openers Rey Pila were winding down their set, the audience was still trying to figure out the Mexico City-originated band. All of the aesthetic conventions of New Goth were seemingly being challenged on the Commodore stage. Singer Diego SolÃ³rzano wore a basketball jersey that showed off his jock-ish physique and a cross on a fine gold chain around his thick neck. The indie-rocker looked more thuggish bro than brooding emo, as one view of the video for 2013’s single “Alexander” (off of their follow-up to 2010’s self-titled debut LP) would lead you to extrapolate. SolÃ³rzano emoted convincingly and, with his display of enthused jumping and clapping, urged the audience to dance “until you start a fight.” Unfortunately, the majority of the crowd was too skeptical to reciprocate – an attitude not atypical of Vancouver show-goers. The indie-award-winning musicians may not have elicited the energetic response that their performance and acclaim deserved but, if nothing else, they gave the audience a valuable take-away lesson: jocks have feelings too.

After a three-year hiatus, Interpol has returned with a just-released new album, El Pintor, and this tour bringing them to the Commodore for a sold-out Monday night show. Augmented by aÂ bassist and keyboardist, singer/guitarist Paul Banks, guitarist Daniel Kessler and drummer Sam FogarinoÂ played a set of hits spanning songs fromÂ 2002’s debut Turn On the Bright LightsÂ and new songs like “My Desire” and “Breaker.” Including the older tracksÂ was a smart choice since, only a week after El Pintor was available for purchase, their fans were still catching on to the new material. It was the crowd’s fluctuation in applause that most clearly differentiated the new songs from the old, at least to this less-acquainted attendee.

Since forming, Interpol has beenÂ the soundtrack for the East Coast cultural epicenter of New York City. But reviews of El PintorÂ have questioned their current relevance.Â Nevertheless, these guys know how to create an atmosphere onstage. More than a sound, their combined instruments generated the romantic and frenetic energy of a city of impossibly well-dressed artists and beautiful people with superpowers to stay out all night drinking and dancing tirelessly.

Fashioned with an understated, slim-fitting suit, tie and pout, Kessler played his guitar with exaggerated flourishes. Banks, suited but sans tie, kept his eyes mostly downcast and a furrow permanently impressed on his foreheadÂ on yearning numbers likeÂ “My Desire”. Their set of disco-rock anthems swelled and crashed like the ocean waves intermittently projected on the screen behind them. Uber-fans artfully jerked along to “NYC” and “Slow Hands.”

Much like the filmic fantastical night we were inhabiting, Interpol’s cinematic performance had its share of cheesy moments, such as when blinding lights were turned on the audience for Turn on the Bright Lights‘ title track. And during”PDA”, their final encore song,Â I mentally cued aÂ scroll of imaginary credits as Banks repeated the chorus, “Sleep tight, grim rite, we have two hundred couches where you can… Sleep tonight, Sleep tonight, Sleep tonight…”