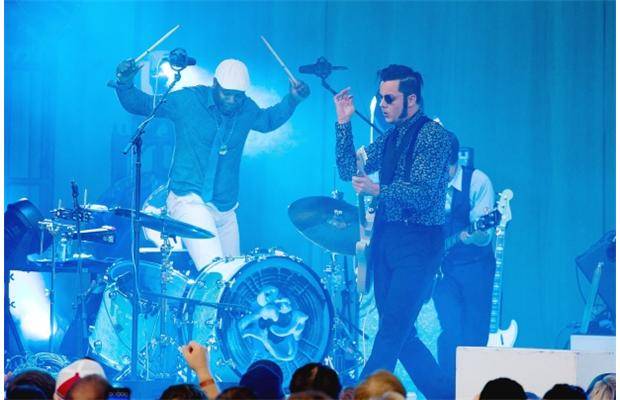 Deer Lake Park was the Canadian West Coast stop for Jack White’s Lazaretto tour this past Thursday evening. Gone were the frontman’s signature chin-length black locks and famous centre part that formed a heart shape around his porcelain-skin baby face. Instead, White sported the same retro rockabilly greaser ‘do that seemingly pour endlessly from trendy Vancouver barbershops. I don’t know whether this new, more mature look was a statement of independence in conjunction with the June release and subsequent promotion of his first solo album, Lazaretto. Although the former White Stripes singer was promoting this career milestone as a solo artist, it was the White Stripes’ hits – starting with opener and personal favourite “Dead Leaves and the Dirty Ground” – that received the biggest response from the hoards that descended on the Burnaby venue. The musician played a set that included his recent material, which lent a mellower, country-twang sound to the performance, such as for “Temporary Ground” and “Alone in My Home.” But he wasn’t shy to delve deeply into the extensive White Stripes’ repertoire, all the way back to the garage rock duo’s 1999 self-titled album for “Sugar Never Tasted So Good”, and a couple of songs from his other band, The Raconteurs.

Before the much anticipated headliner took the stage, an announcement was made to the crowd: in order to ensure everyone’s enjoyment of the show (and control of the media representation surrounding White’s performance) photography was prohibited. No cellphone photos, we were told, could live up to what we were about to experience live. And besides, White’s touring photographer would have the night’s photos online and available to use and credit as our own by Friday morning. Noble or otherwise intentioned, the majority of the audience was sufficiently shamed and obedient.

The respectfulness ended there. The droves of White fans that ventured out to the park on Thursday night were seemingly already in Labour Day long weekend mode. The boisterous energy of the crowd that turned out for White’s Vancouver performance was out of proportion with the overall onstage presence. The rowdy bunch that unapologetically mowed to the front of the stage clearly wanted to rock out non-stop. Some took advantage of any opportunity to crowd surf, whether it was appropriate to the musical vibe or otherwise.

Although everything that White has produced musically has been tinged with the blues, the choice monochromatic lighting literally washed the stage in it. Accentuating White’s icy pallor, the lights alternately saturated or flickered with shades of blue, from royal to cerulean to indigo. The stage set-up was also minimalist, with a sleek retro television set broadcasting static for the centrepiece. White’s fascination with colour palette and uniform – most famously evident in the White Stripes’ strictly red and white aesthetic – was also evident in his entourage’s outfits of black shirt and pants complete with blue vest, ties and fedoras. White’s talented band – which included the obscure and mention-worthy inclusion of a theremin-manipulator – were allowed more personal expression with their fashion choices.

As the night progressed, White’s signature scratchy vocals became questionably hoarser and came close to cracking or being lost altogether, thanks to a late but much appreciated burst of rock’n’roll energy. Luckily, the singer had help from the audience and his violinist/ukelele-player who harmonized and responded to his calls. White’s musicianship, on the other hand, maintained its confidence throughout the night as he switched between acoustic and electric guitars, do-si-doed with his sole female bandmate (and Meg White doppelgÃ¤nger), and took a couple of turns at one of two pianos.

After an hour-long set, White and his band were summoned back on stage by a chorus of fans singing the catchy guitar/bass line of the White Stripes’ opening track off of 2003’s Elephant, “Seven Nation Army.” They played a 30-minute encore that concluded with the audience’s request. White made it clear that although his opinions and musical vision, down to the most minute detail were unwaveringly strong (and, I would opine, neurotic), he was still aiming to please and subsequently appease.