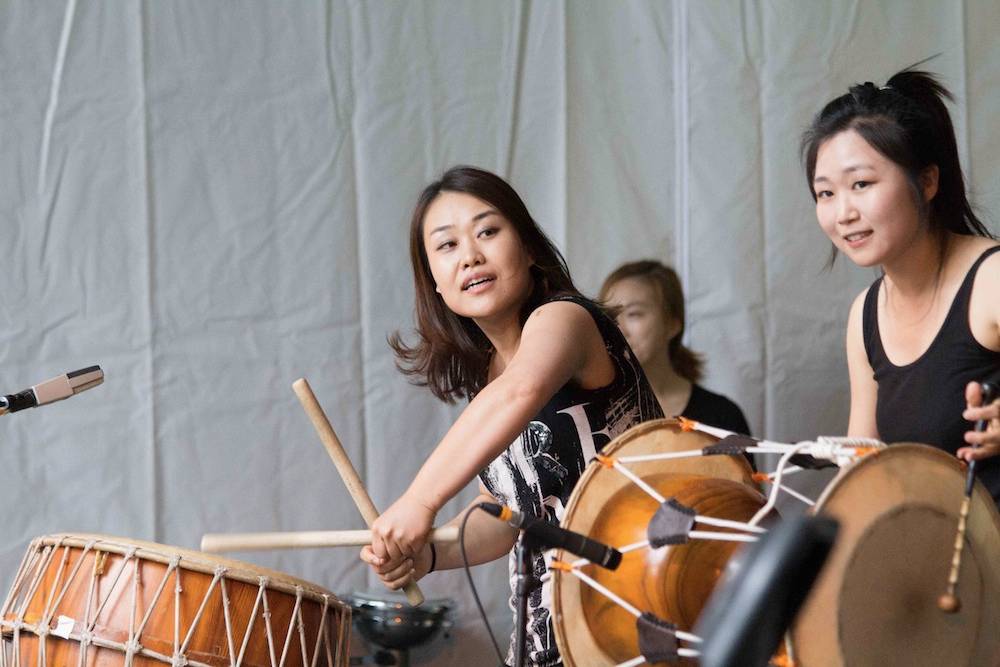 – recap by Shawn Conner/photos by Robyn Hanson (except otherwise noted)

There were no attendance records set Sunday, the final day of this year’s Vancouver Folk Music Festival. By the looks of the grounds mid-afternoon, people were staying away in droves, either because of the grim-looking cloud cover or because a lot of potential customers had made the trek north for theÂ Pemberton Music Festival. More likely it was the former reason – too bad, because the rain never came and the lineup was characteristically diverse, entertaining and surprising.

We arrived 2-ish, justÂ in time to catchÂ the secondÂ half of a set by Mokoomba, a Zimbabwean band whose Afro-fusion was definitely sunnier than the skies. They wereÂ joinedÂ onstage by Manitoba poet/songwriter Leonard Sumner (Mary Lambert, a scheduled Sunday headliner, was also supposed to appear on the stage).Â ParkingÂ ourselves in the beer garden for the remainder of the set, we reflected on the yet-to-appear-but-rumoured-to-be-comingÂ update to provincial liquor laws that would let us drink beer somewhere other than a beer garden. Such reflections were further fueled by Jon Langford‘s whiskey-soaked vocals and violinistÂ Jean Cook‘s sweet accompaniment on songs from the Mekons frontman’sÂ new solo album, Here Be Monsters.Â The duo was joined for a song by aboriginal folk singer Roger Knox. 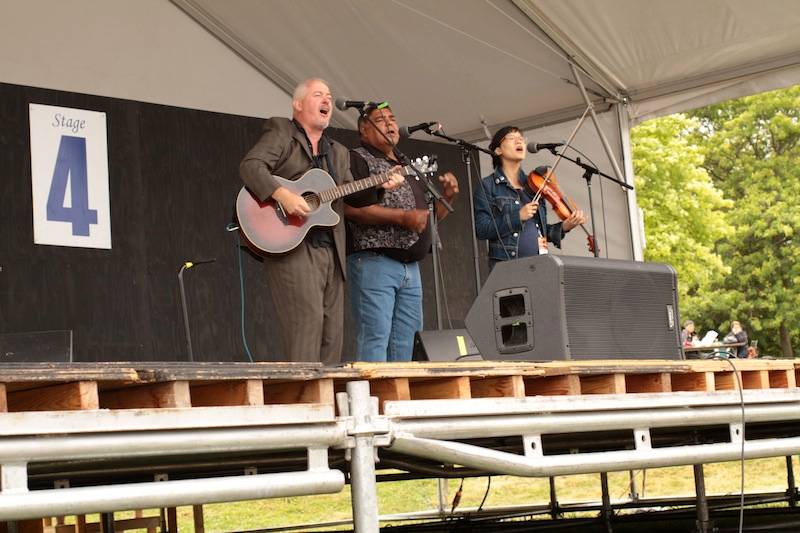 Oh My Darling was wrapping up their set by the time we reached Stage 3 in the eastern edge of the park. The Winnipeg quartet was in upbeat bluegrass-y mode, harmonizing beautifully onÂ originals like “Take Me to the River” and encouraging the audience to do some foot-stomping and hand-clapping to a song I believe is called “Don’t You Rock ‘Em Daddy-O” (that may have originally been recorded by Lonnie Donegan). 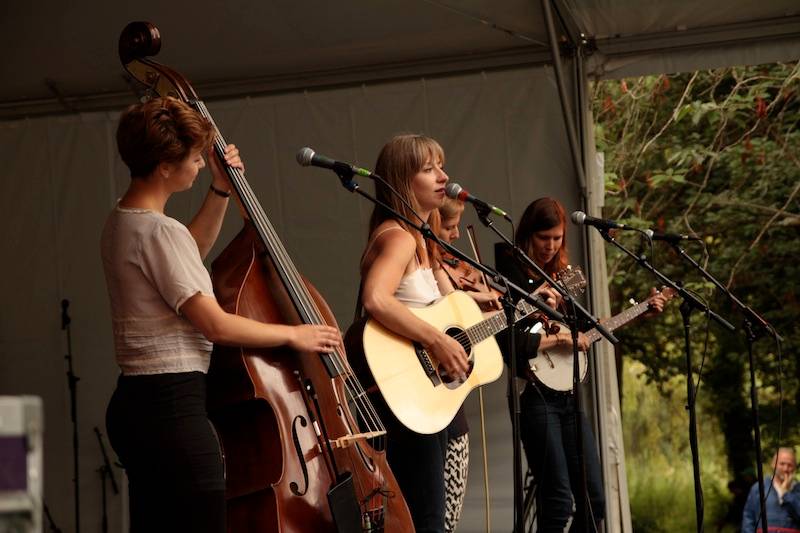 On Stage 5, Vancouver band PacifikaÂ enthralled a sizeable audience withÂ their pop-friendlyÂ tropicalia. Backed by a five-piece band, singerÂ Silvana Kane provided some much-needed sensuality to the festival with some sexy dancing and vocals, particularly when she sang in Portuguese. (Pacifika plays a CBCÂ Musical Nooner 12 p.m. Wednesday July 30 at the Outdoor Plaza at the CBC Vancouver Broadcast Centre.) 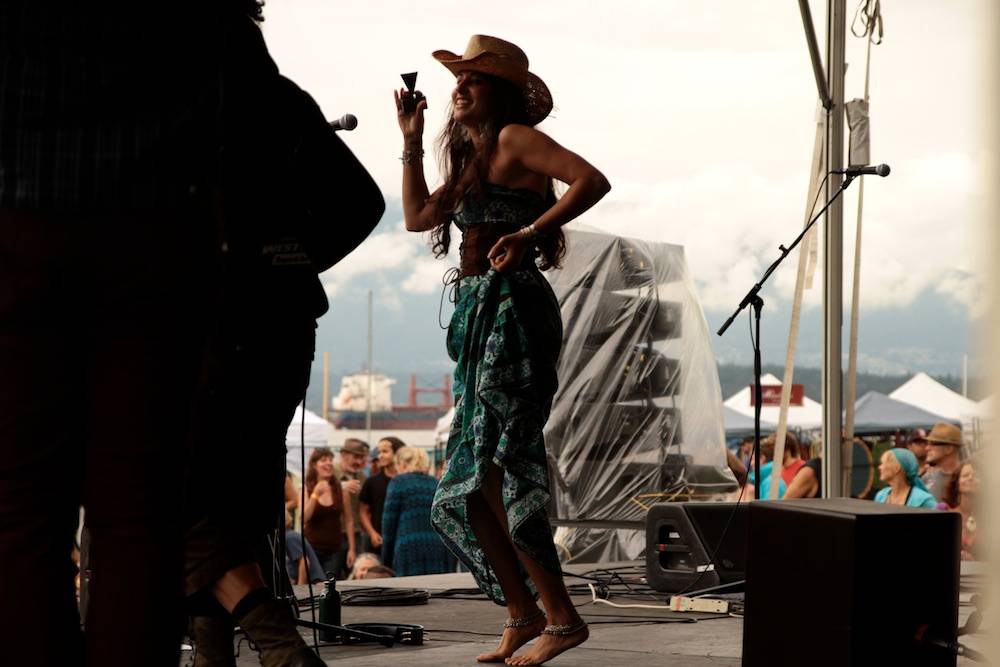 While the big news at Pemberton was the so-called “mysterious” death of a festival-goer (a press release issued by the New Orleans-based promoter simply stated “…Â we remain saddened by the loss of Nick Phongsavath, and our heartfelt condolences continue to go out to his loved ones”), the most buzz at the folk festival was generatedÂ by theÂ last-minute cancellation the night before of Joan Baez‘s Saturday night closing set (other folk festival acts stepped in to fill the gap that opened up followingÂ Alejandro Escovedo‘s set, which was capped by a barn-burning version of Neil Young‘s “Like a Hurricane” – or so I heard). The 73-year-old Baez’s reason for the no-show? Laryngitis.Â

Though the Sunday lineup was mostly, as mentioned, solid, I had to question the decision to give Mary Lambert a headlining slot. The Seattle singer has had a good year, singing on a hit pop-rap tune (“Same Love”) by Macklemore & Ryan Lewis and performing with theÂ duoÂ on the Grammys. But her set was full of stops and starts and between-song humble-bragging, about that Grammys performance and also appearing on the cover of that week’s Georgia Straight. In what one might generously call a delightfully perverse move, her set also included a cover of “Teenage Dirtbag”. No doubt it’s a track that goes over gangbusters with her regular audience, but I have a feelingÂ thatÂ the 2000 alternative-rock song by the bandÂ Wheatus flew over (deservedly so) the greying heads of the folk-fest audience.

More deserving of the mainstage slot, if only because of the size of his band (14-strong), was Nigerian favourite son Seun Kuti. The original songs from theÂ offspring of Afrobeat pioneer Fela KutiÂ aren’t anything to write the diaspora about, but Egypt 80 – his band, handed down from his father – is, and they transformed the singer’s ideas into grooves that almost justified theÂ songs’Â seven- and eight-minute lengths.

Our final act (though still early in the evening) was Dulsori. The Korean band follows a drumming tradition from its native country, but the ensemble also boasted a charismatic frontwoman/vocalist. The energy and sheer joy of the performance were high points for this festival attendee, and the kind of surprise that always makes going to the folk fest – even on a cloudy day – a chance worth taking. (Dulsori also plays the Mission Folk Music Festival this weekend.) 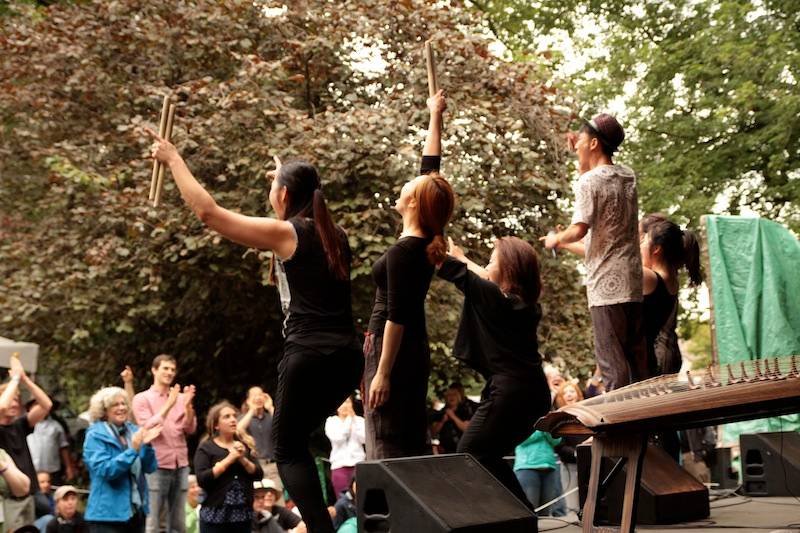