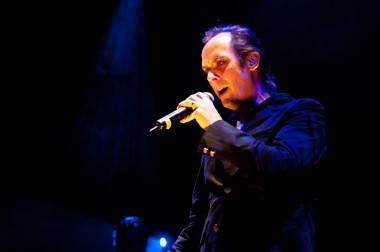 Not for lack of interest, I wasn’t prepared to make mention of theÂ Peter Murphy’s opening band,Â Ringo DeathstarrÂ – I assumed that Murphy would provide me with ample material. However, that a not-goth rock band from Austin, Texas wasÂ selectedÂ as the opener for his North American tour seemed an interesting choice and a point worth mentioning. The difference in genre (Ringo DeathstarrÂ are heavily noise-rock and shoe-gaze inspired) compounded with the large generation gap made me even more curiousÂ about what motivated the addition of this group in particular to the line-up. Unfortunately, the band’s set seemed to double as a soundcheck. The unpreparedness or inexperience of the sound engineer meant that the four Austin musicians weren’t given justice until the end of their set.

Also on the topic of injustice: a particularly unflattering and infamous photo ofÂ MurphyÂ was circulating my workplace early in the week prior to his show at the RickshawÂ on Friday. The picture in question was taken before the 2013 Mr. Moonlight tour, and was of a plainclothes, somewhat downtrodden-looking Murphy. In a tucked-in polo T-shirt and sans stage make-up, the Godfather of Goth looked moreÂ Harvey PekarÂ (self-deprecatingÂ author of the autobiographical comicÂ American Splendor) orÂ Steve BuscemiÂ as Seymour in (indie-flick comic adaption)Â Ghost World. With this bleak image still part of recent memory, it was understandable why some long-time fans may have chosen to forgo this year’s tour in support of his tenth solo album,Â LionÂ (released earlier this month). Captured looking so ordinary and undeniably human, the image’s resurfacing was an unsolicited reminder that our icons are equally susceptible to the passage of time.

Nonetheless, the Vancouver show was still one designed for the fans, even if they didn’t exactly come out in droves. Murphy put in very little effort at showmanship and left the theatrics to his younger bandmates. Even his stage outfit was unimpressive: black pants and blazer atop a black zip hoody. GuitaristÂ Andee BlacksugarÂ stood out for his typical punk-goth uniform, whileÂ Murphy’s bass player stood out for his impressive violin interludes. BesidesÂ the orchestral element brought by the addition of violin to a few numbers, a distinct ska influence was also apparent in at least one of Murphy’s melodies. It was an obvious nod to a genre that doesn’t immediately come to mind when I think of Murphy or his seminal dark wave band,Â Bauhaus.

Murphy kicked off his set with “Hang Up”, the opening track off of his latest album release. This was not strictly an album tour, though, and Murphy gave equal attention to some older material including “Memory Go” and “Velocity Bird” off of his previous album,Â Ninth. With over 30Â years as a solo artist and with one-third as many albums to cull from, the paring down process must have been a daunting task. Murphy showcased his own musical talent and diversity when he was required to put down the mic for a few chosen songs. He strummed acoustic guitar and demonstrated his melodica skills during his performance of “A Strange Kind of Love” off of 1989’sÂ Deep.Â Murphy’s vocals were most impactful when he dropped to lower registers.

Considering the demographic of thoseÂ audience members who, like myself, took advantage of the theatre seats, that the Rickshaw opened up its balcony seating could have indicated a few possibilities. One was that the venue expected Murphy to draw a crowd relative in size to his extensive musical career. Another was that they had anticipated a crowd of mostly middle-aged Bauhaus devotees with backs not up to standing on the Rickshaw’s brutal concrete floor for several hours. A good portion of the audience didn’t budge from their comfortable vantage point at the back of the venue to navigate a mostly stagnant and dark sea of bodies. However, standers and sitters alike warmed up in tandem with the band, and a few of the former even joined the latter. The show may have underwhelmed, but it was far from the comical train-wreck hinted at byÂ that candid year-old photo.

One response to “Goth godfather leaves the theatrics at home”