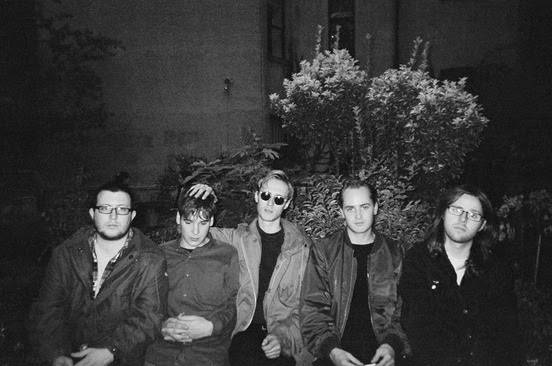 Hardcore up-and-comers Eagulls thundered through their set on Tuesday night, putting on a performance that nearly brought me and a few other former troublemakers out of moshing retirement. They packed the tight quarters of the Media Club with fans who were drawn to the group’s ominous soundscapes and infamous off-stage assertions.

Last year, the Leeds outfit published an open letter on their blog painting a malign picture of the major players in an overhyped and inauthentic indie music scene. While not everyone agreed with their estimation of the industry (particularly their harsh commentary on the gimmicky nature of female-fronted bands), their brutal honesty has still won the hearts of many post-rockers and music critics around the world. This defiant attitude bled through every ferocious noise track they offered at their Vancouver debut. They were a perfect match with local band Cowards, recently making waves in the city’s noise scene.

Eagulls have steadily built a following through their volcanic live shows over the past five years, impressing punk diehards with their growing repertoire of brash and confrontational singles including “Council Flat Blues”. The band is now midway through their first North American tour in support of their eponymous LP (released last March via Partisan), with lead singer George Mitchell verbalizing the tension and frustration that constitutes the record.

Mitchell stood out as the intriguing, often intimidating, oddball in the group. For most of the night, he kept a vacant look on his face, sputtering indistinguishable mumbles between tracks, but consistently delivered intense, forceful vocals. Eagulls’ co-founders Mark Goldsworthy and Henry Ruddel certainly recruited the right man for the job – they’ve nailed the “angry and menacing” sounds that Mitchell aspired to create as a 13-year-old trying to emulate his idols in the Sex Pistols and Stiff Little Fingers. .

Those DIY influences could clearly be heard on “Tough Luck” and the crowd-favourite “Possessed”, the latter featuring a siren-like guitar riff. Ruddel and bassist Tom Kelly built a solid and pummeling rhythmic foundation that guitarist Liam Matthews and Goldsworthy expanded on with rigorous chord progressions and soaring solos. “Nerve Endings” evoked hints of Joy Division’s art-rock vibe and Fucked Up’s boarish punk-core sound. Each member looked completely absorbed in their task, each committed to wringing out every piercing harmonic they could squeeze out of their instrument. If last night’s explosive performance was anything to go by, we can expect these firebrands to push the limits of the hardcore scene for years to come.