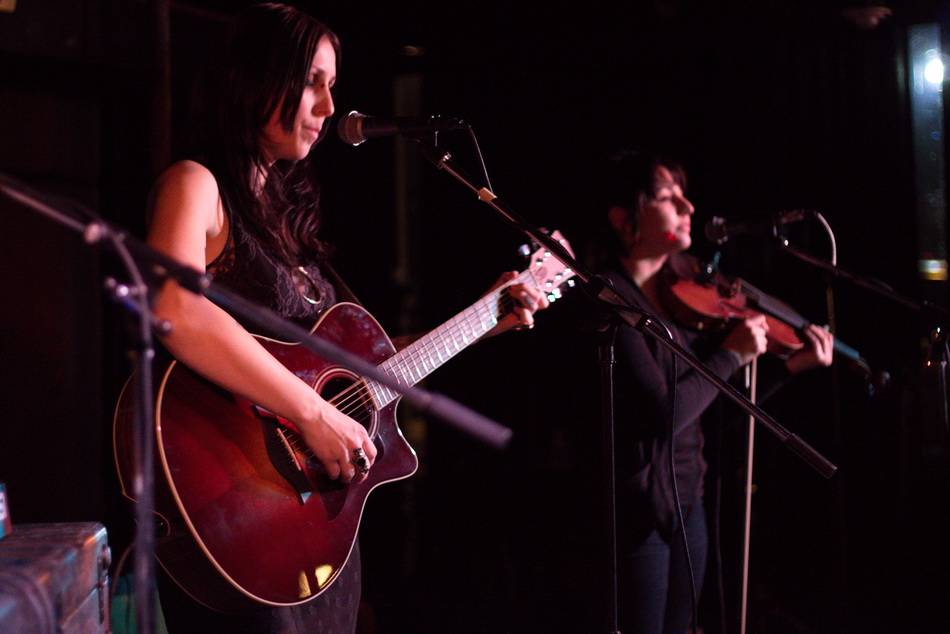 JudgingÂ fromÂ the mostly black-clad crowd at the Electric Owl, those who ventured out forÂ Chelsea Wolfe’s Summer Solstice show were glad for the excuse to shun the extended daylight hours. WolfeÂ too was defiantly dressed in a batwing sweater and tan tunic layered over black pants and long-sleeved shirt.

Before the singer/songwriterÂ had evenÂ walked onstage, deep red lights drenchingÂ a drawn velvet curtain and a spinning disco ball added to the morbidlyÂ romantic setting. Although the summer sun still held shrine outdoors, inside the fresh air was replaced by a thick and moody fog. The stage was set ceremoniously with a gold cloth-draped plinth.Â What proceededÂ was a solemn and hauntingÂ performance. Unfortunately, not everyone was respectful of the mood, and the enchantment was frequently broken by a group of oblivious and entitled punks up front.

Advertised as an acoustic set,Â Wolfe’s show nonetheless also featuredÂ violinistÂ Andrea CalderonÂ and keyboardist/bassistÂ Ben Chrisholm. The mournful violin wails and pulsating bassÂ emitted supernaturalÂ frequenciesÂ andÂ at times the stage lighting flickered as if possessed. Considering the themes of death and lost love that echoed across Wolfe’s musical releases, paranormal activity would not have been an unexpected occurrence.

If anything sinister was at play, it was likely possession.Â WolfeÂ channeled the early incarnations of two of myÂ favourite singer/songwriters:Â Cat PowerÂ andÂ PJ Harvey -Â “We Hit A Wall” and “Sunstorm” could have fit easily onÂ the latter’s To Bring You My LoveÂ andÂ Stories From the City, Stories From the Sea, respectively.

Wolfe was more of a bewitching presence than performer. Although not a word was uttered to the audience until her tenth song, she exuded no ego or attitude.Â One black-rimmed eye gazed unwavering out from her fine features and longÂ side-swept bangs. Her breathy vocals were both hymnal and intense, a ghostly but comforting embrace.

The longest day of the year had turnedÂ pitch black by the time Wolfe’sÂ encore ended, but I had noÂ remorse aboutÂ having shirked my self-imposed sun-worshipping duties. It was a smooth transition from the cool but empathetic holdÂ ofÂ Wolfe’sÂ voice out into the equally dark and comforting warm summer night’s embrace.