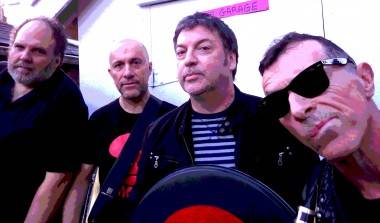 The Enigmas reunite this Saturday, Jan 11 at the WISE Hall. It’s been four years since the seminal Vancouver band reunited for another one-nighter, which was filmed for posterity. Saturday’s gig isÂ in support of a new DVD release of that 2010 concert.

Although the band’s career was short-lived (1982-86), the Enigmas earned a reputation for their wild and energetic live shows. The group’s members include a host of Vancouver music scene vets, includingÂ Paul McKenzie from the Real Mckenzies, Randy Bowman from Subhumans, Stephen Hamm from Tankhog, and Mike Davies from Jp5. Only three of four original bandmates remain; the original bassist Brian Olinek left the band after relocating.

In their heyday, The Enigmas released two full-lengths, 1983’sÂ Enigmas? and Strangely Wild (1985), along with a handful of other tracks (i.e. “Roadblocks Are All Over This Town”).Â Some of the songs featured on the upcoming DVD release include “Windshield Wiper”, “Out of Question”, “Teenage Barnacle” and “Psychotic Reaction”.

In a recent interview withÂ Beatroute, the Enigmas boys revealed more to come. “We have a plan to rerecord some of the material that never made it out,” Bowman said. One song to look forward to will be the remake of “Charlie”, a song about Charles Manson.

The tickets for Saturday are $20. Opening for the Enigmas will be Circus in Flames and The Furniture. You can buy tickets at downanddirty.com.