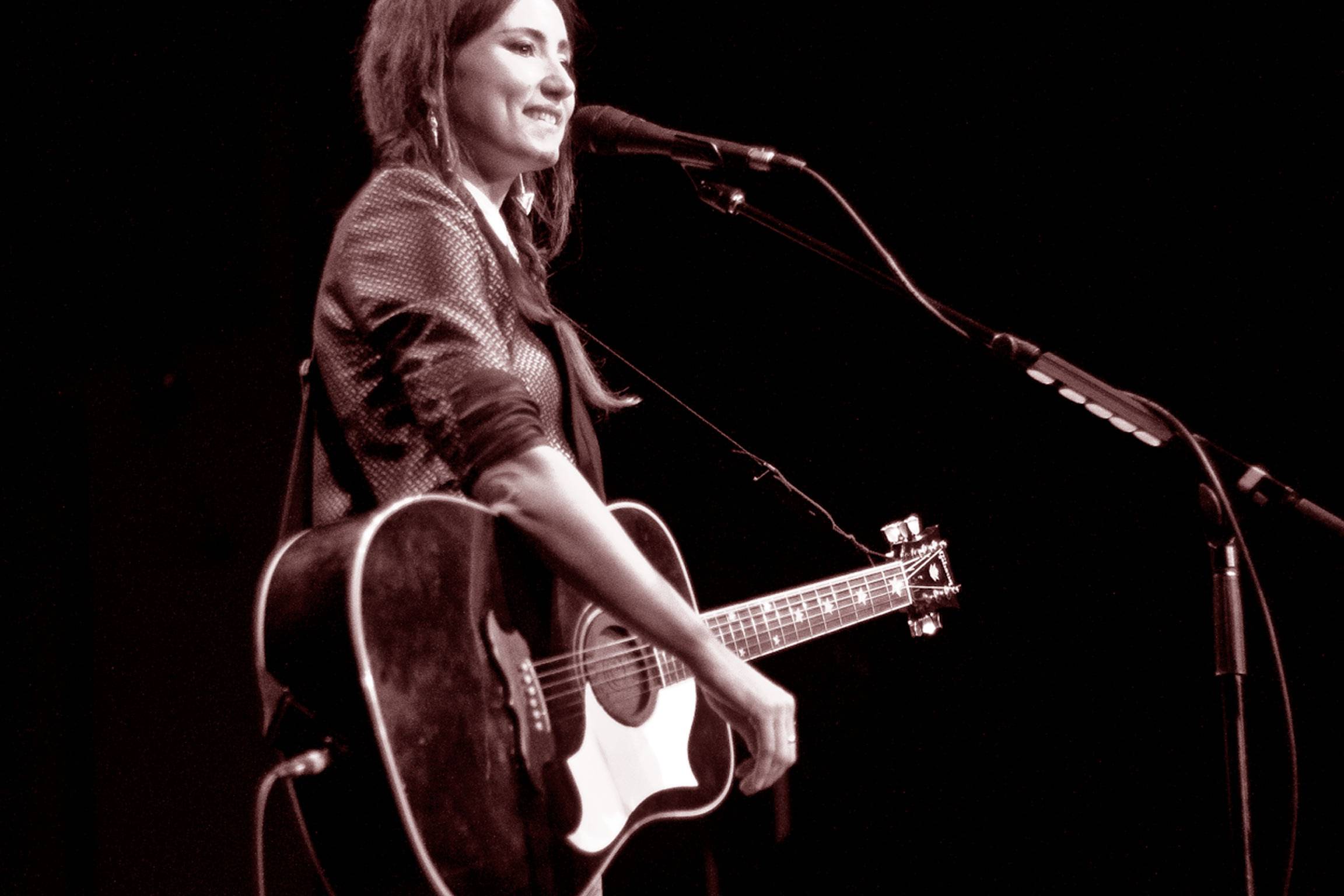 Standing tall in a Spaghetti Western-esque suit, she started the show by admitting, “I haveÂ been writing a lot of songs about death. I hope that’s alright.” To herÂ delight, Vancouverites responded with cheering and whistling. She responded with,Â “That’s the first time I got death applause!”

A floor-to-ceiling canvas backdropÂ with two dashes of white and red war paintÂ across it set the mood. Evocative of aÂ desert landscape at sunset, the backdrop was representative of her latest release, the recorded-in-TucsonÂ Invisible Empire/Crescent Moons.

Tunstall opened with new songs including “Invisible Empire”, “Carried” andÂ “Old Man Song”. The latter, she said, was about a desert punk rock band in Tucson she knew.

She soared throughÂ each song without a shred of shyness and a stance that brought to mind the late Johnny Cash. Even with guitar, vocals and loop pedals for her only accompaniment, nothing about Tunstall seemed lonely or isolated on the tall Rio stage.

Other songs included “WhiteÂ Bird” off her acclaimed second album, Drastic Fantastic. The song earnedÂ the crowd’s complete awe and attention.Â Unlike the recorded version, which lends itself to a singalong,Â her live rendition was much more vulnerable as she layered lulling backups with herÂ loop pedals in tandem to the beat.

After a few fan favourites, including “Under the Weather” offÂ her debut album Eye to the Telescope and “Funny Man”,Â she took to the piano for a ballad,Â “Yellow Flower.” Tunstall, who’s mostlyÂ known for her guitar licks and loop pedaling, seemed equally perplexedÂ as we did by her migration to the piano. “I never quite got a grip on this thing,” she told us, referring to the sheer weight and size of keyboards and pianos.

To our delight, Tunstall on the keys was aÂ perfectly fitting way to manifest her recent gains and losses, including the death of herÂ father.

Later, she indulged us in her biggest hit and the song that catapulted herÂ into international stardom, “Big Black Horse and a Cherry Tree”. Mid-way through she pulled out aÂ kazoo and launched intoÂ The WhiteÂ Stripes’ “Seven Nation Army”.

For her encore, she sung her most radio-friendly hit “Suddenly IÂ See”. “This is what happens when I thought about Patti Smith andÂ Bo Diddley at the same time,” she said by way of introduction. She could’ve safely ended there, with her devoted fansÂ dancing and cheering, but then she again doffed her guitar and went into the hymn-like “Chimes”. Once again, the song proved that Tunstall doesn’t reinvent as other pop/folkÂ songstresses so famously do. Rather she reincarnates with the best ofÂ them – same soul, new form.