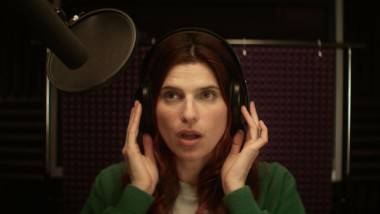 Lake Bell stars in, directs and writes In a World.

Movie review – In a World…

In a World…, actress Lake Bell‘s feature-film directorial debut, has a premise with almost enough comic potential to carry it through to its 90-minute mark. Almost…

Now that Don LaFontaine, the godfather of voiceovers, has passed away, there is a void in the world of movie trailers. LaFontaine was the guy always intoning those biblical-sounding voiceovers in trailers, at least some beginning “In a world…” (i.e. “In a world where apes rule and humans are slaves…”).

Who will fill this void, especially now that a major studio is embarking on a “quadrilogy” of movies based on a series of YA sci-fi books called The Amazon Games (a forced allusion to The Hunger Games – one of many jokes that is almost funny) that requires the return of the words, “In a world…”, preferably delivered in a big, booming (male) voice.

There are a couple of obvious contenders, including Gustav Warner (Ken Marino), arrogant and spoiled and pretty good-looking for a VO actor, and veteran Sam Sotto (Fred Melamed). The dark horse is Sotto’s daughter, Carol Solomon (Bell), a vocal coach who suddenly finds herself in the running for the coveted role of stentorian bullshit artist.

However, the script is riddled with clichÃ©s. For instance…

Will it surprise you to learn that Carol is a 31-year-old underachieving and unambitious slacker, or that her elder statesman father has a young girlfriend, or that Carol has a sister who is having marital difficulties, or that Carol finds herself torn between two men – a smooth-talker (Warner) and a nice guy (Demetri Martin)?

That Carol, despite being beautiful and the daughter of L.A. wealth and privilege, nevertheless has difficulty getting out from the backseat of a compact car (interestingly, Bell has a car column in the Hollywood Reporter, so she probably knew just what kind of car to choose for a scene that calls for her to awkwardly disengage her lanky frame)?* 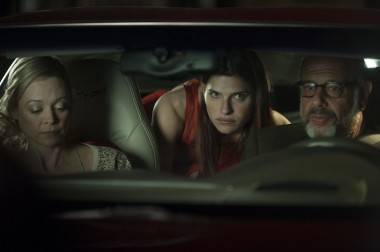 Bell has to get out of the backseat of a small car in the new comedy In a World… opening in Vancouver Aug 16.

Or that there’s a scene in a karaoke bar?

Will it surprise you to know that the supporting cast is full of (mostly wasted) comedic talent, including Rob Corddry (Bell’s co-star from Children’s Hospital), Tig Notaro, and Martin?

Unfortunately, while ticking all the above romcom boxes, In a World… comes up short. It’s an almost-funny comedy about people who behave in almost-believable ways (you can see Bell, who has probably never worked an honest day in her life, struggling to come up with a sympathetic main character by trying to make her appear like someone who might go see a movie like this) and who have almost-relatable problems (this is L.A., remember). I was checking the time at the 50-minute mark. 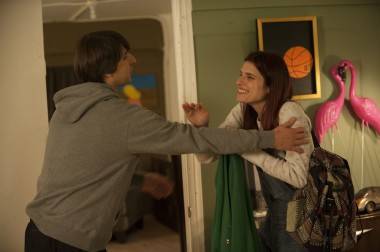 Yes those are really pink flamingoes in the Demetri Martin character’s apartment.

But don’t take this reviewer’s word for it. The audience seemed to like it and the script was given an award at the Sundance Film Festival this year. And the studio believes in it; possibly Sony sees In A World... as an antidote for summer blockbuster fatigue, and a movie with the potential to bring in the Bridesmaids demographic.

More power to them – and to Bell, who can’t be faulted for her ambition, and who may yet make a really good, even funny movie. I just don’t think In a World… is it.

In a World… opens at Fifth Avenue Cinemas in Vancouver Aug. 16.

*This scene, and Bell’s character, reminded me of what Mindy Kaling wrote about the types of characters always seen in romantic comedies, including one she calls “The Klutz”, to wit: “When a beautiful actress is cast in a movie, executives rack their brains to find some kind of flaw in the character she plays that will still allow her to be palatable…Â So they make her a Klutz.Â The hundred-per-cent-perfect-looking female is perfect in every way except that she constantly bonks her head on things…”