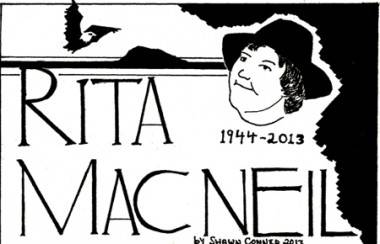 Like many Canadians of my generation (X!), I thought of MacNeil, if I thought of her at all, as a mainstream singer that appealed mostly to Top 40 listeners.

But the more research that I did following her death, the more I came to respect the singer.

She overcame tremendous odds to become a success. In an industry that values beauty and youth, she was a large woman who experienced her first real success in her 40s. In an industry that is always looking for something new, she had a career that lasted over 20 years. In an industry centred in Toronto, she was from the East Coast. And before she signed to a record company, she released and financed her albums herself.

So, here’s to Rita MacNeil – a true hero of the Canadian music industry.