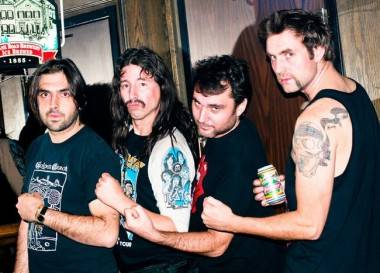 In my interview with the Deaner, he wanted me to warn Vancouver fans that his band doesn’t tour often, so the Biltmore Cabaret show is their “once-in-a-lifetime opportunity” to see them. He also wanted me to pass along his sage advice for givin’er and how to prepareÂ your ears, and your soul, for the fury of sound that Night Seeker unleashes. 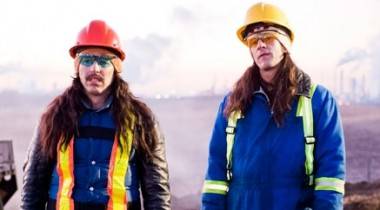 D: I know there’s always some people who are like, this is my first rock show… youÂ can’t be coming out of the womb knowing what a rock show is like. You got to prepare.

Basically it’s about finding your centre – your centre of givin’er. You pre-give’r atÂ someone’s house or at your own house; then you listen to a bunch of rock tunes. EvenÂ if you don’t have any Night Seeker, I recommend listening to some Sabbath or someÂ Maiden or a little AC/DC or Van Halen.

D: Yeah, and they need to prepare their psyche. Then you hobble on down to theÂ show and when the opening band plays you’re like, sweet. They just kind of warm youÂ up. Then the lights go out, and the curtains open up and it’s Night Seeker. You’re kindÂ of scared, but you’re also really pumped and excited. It all comes together when theÂ first chord plays, and you’re kind of blown away. Then all of a sudden you’re bangingÂ your head all night

D: Good point. I really like Van Halen before I play. Something like “Light Up TheÂ Sky” or “Hot for Teacher”, that kind of speed. That really gets me going. I like to do aÂ little jogging on the spot to get ready, just to get the heart racing a little, ‘cos if youÂ go on stage and you’re cold, people can tell. Being a finely tuned party machine is basically like being a professional athlete; you got to warm up and shit.

MW: But you don’t want to warm up too much, right? What if you can’t play becauseÂ you gave’r too hard beforehand and you’re so worn out that you need a nap?

D: Oh, that’s so true. You’re hitting something right on the head there. The key toÂ givin’er is all about pace. I need to take an afternoon nap. I’ll have a couple of wobblyÂ pops for lunch or breakfast, around eleven o’clock or ten; then nap around two untilÂ four or five. And then you can get the motor going again. Cause if you’re up givin’erÂ since noon, there’s no way you’ll be in shape to play a show let alone go and see one.

D: I never missed a show, but one time me and a buddy were in Amsterdam, we wentÂ to see AC/DC, and I gave’r too hard before the show; we almost didn’t make it [to theÂ show]. Basically he had to hold me up by the back of my leather jacket. At one pointÂ I was actually drooling on the jacket of the girl in front of me. I was half passed out onÂ her, but she was cool with it. My buddy was like “We’re men. Wake up. You’re aboutÂ to pass out on her.” But then they started playing “For Those About To Rock” and thatÂ woke me up.

D: What didn’t I do? [laughs]. Four-twenty is kind of funny because the real burners have noÂ idea what day it is, ever. Four-twenty always comes and goes and they’re like “Oh, yeah, it’sÂ 4/20” but it was a week ago. That’s how I see it. It was a coincidence that I happenedÂ to be celebrating it anyway. But I like to go get those alien face rollies – those are myÂ special occasion ones, Â the friendly spacemen.

MW: [laughs] So, what do you plan on playing for the Vancouver show? Mostly covers,Â originals, or a mix of both?

D: Yeah, a mix of both. It’s always fun to pull out a Judas Priest tune or an IronÂ Maiden tune. We’re going to do a couple tunes from FUBAR, the movie – people willÂ recognize that kind of stuff. We’ll do a couple of our own songs like “In The GardenÂ of Evil”, “You Got To Get Hammered Before You Get Nailed”, and one called “Give’rÂ Take All”. That one is kind of our tribute to AC/DC; it’s very AC/DC-style.

MW: Night Seeker is known to play “Every Rose Has It’s Thorn”. Any chance you’reÂ going to play that one for the ladies?

D: I don’t know. We haven’t been playing that one much lately ‘cos you know theÂ ladies – they go too crazy and start tearing the place up. But we might do it if theÂ crowd is calling for it. We might have to pull it out [laughs].

MW: Are you going to get someone from the crowd up on stage to shotgun someÂ beers with you?

D: Fuck yeah. I’m looking for the shotgun champion of B.C. I’m going to be timingÂ people. We’re going to Vancouver, Victoria, Kamloops, Kelowna, so I wonder whereÂ the champ’s going to be.

D: The shot gun champ will be rewarded. They might even get a box of my patentedÂ Kraft Deaner.

D: Well, it’s like Kraft dinner except you use pilsner. I also like to throw in a little baconÂ grease instead of butter. That’s the ultimate Kraft Deaner.

MW: So you guys have played with a band called Monster Truck from my homeÂ town, what do you think of them and their recent Juno win?

D: It’s kind of hard to believe they won a Juno-not that they don’t deserve it, but becauseÂ these guys are actual party animals. When we were on tour with them, theyÂ were like, “come on guys, lets giver harder and longer. ” They were always the lastÂ men standing.

I think it’s a tribute to the Junos and how they know its not alwaysÂ about some guy with an acoustic guitar and a laptop. They gave it to the new and mostÂ upcoming band, Monster Truck. And I’m just stoked that they gave it to a band fromÂ Hamilton ‘cos you don’t always hear Hamilton in the news.

Then you tell him you lost – let’s just say your snow shovel – and then he disappearsÂ in a cloud of smoke and comes back with your shovel. Sometimes he is like,Â “Now it’s time for payment,” and he’ll ask for a pair of socks or a box of condoms orÂ something. You never know what he’s going to ask for. Sometimes it’s no big deal,Â but then other times he’ll ask for all the beer in your fridge, and you’re like “What!Â That was so not worth finding my shovel.”

You better make sure that when you summonÂ the Night Seeker that you’re willing to pay the price.