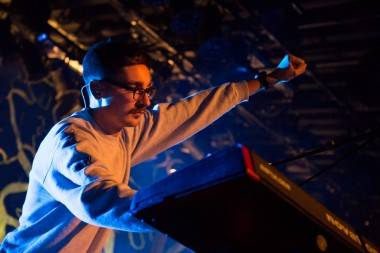 Attempting to warm up the early crowd was Florida-born art rock group Hundred Waters. The four-piece band, led by multi-instrumentalist/singer Nicole Miglis, have a layered, smart, even unique approach to their blend of electronic elements and pop. Â But as their set went on the songs, mostly from their eponymous debut album, became too experimental and improvisational, even for the purest of music nerds in attendance. Miglis’ delicate voice was drowned out Â by the songs’ disjointed electronic loops and beats. Bored and disinterested, the audience indicated their apathy with constant chatter for the duration of the set. Hundred Waters left everyone longing for the main act.