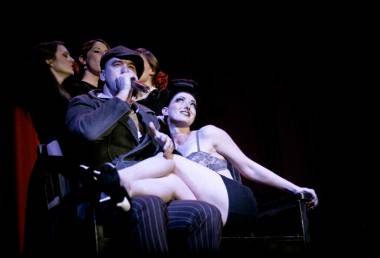 Now in its second year, Tongue N’ Cheek once again brought together some of the city’s top burlesque performers with spoken-word artists from Vancouver and the U.S.

Said Jess, “The evening started out a dirty-haiku stand off between a handful of local poets, hosted by England-born Jessica Mason-Paul, best known for hosting poetry slams at Cafe Deux Soleil on Commercial Drive. The vulgar haikus referenced everything from Stephen Harper to failed one night stands.

“The second half was hosted by Sweet Soul Burlesque‘sÂ Crystal Precious, who also sang in between numbers. Known for her unique ‘strip-hop’ numbers, she surprised us with a sultry cover of ‘Sunday Kind of Love’, most famously sung by Etta James.

“The evening felt like true celebration of West Coast performance, and featured each poet paired with a member of Sweet Soul Burlesque… Sweet Soul’s ‘Rock n’ Roll Flapper’ Lola Frost performed a solo number, adorned in a leather jacket and feather headpiece, and later returned to the stage paired with Vancouver poet Duncan Shields for a piece backed by melodic guitar reminiscent Jeff Buckley. Frost posed behind Shields, then caressed him, and then wrapped her legs around him, hugging him and arching backwards for his last verse.

“DeWolf, known for his outspoken, profane, yet profound poetry, often celebrating female sexuality and power, was paired with the fiery Cherry On Top. His poem spoofed famous Disney princesses, unpacking female stereotypes, as Cherry On Top peeled off each Disney princess costume she wore, starting with Cinderella, then slowly revealing Jasmine until she was down to pasties and a wand.

“The last duo included Little Miss Risk and C.R Avery’s spoken word mixed with beat-boxing and backed by the jazz-influenced Company B Singers singing a capella. The piece played out like a seduction scene out ofÂ A Streetcar Named Desire.

“The encore was introduced by Lola Frost, who was beaming as she told us how she had spent the last two days teaching three poets ‘manography’ as she called it, to prepare them for their first burlesque number.Â Sure enough, Avery, Shields, and DeWolf Â came hesitantly onto the stage for their burlesque debut, stripping to none other than Footloose’s “I Need a Hero” sung by Risk. The supportive and wildly entertained crowd were cheering throughout the entire piece as the poets abandoned their hesitation, threw down their sunglasses, and had their white button-up shirts torn off by the Sweet Soul dancers, and finally threw their belts and bling into the crowd.”