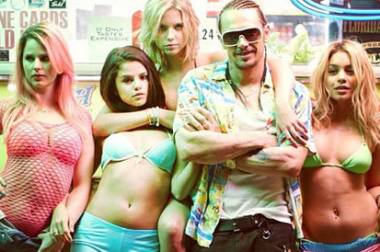 Spring Breakers is definitely a trip worth taking

And by “trip”, I mean that in every possible sense of the word.

I’m sure I’m not the first (nor the last) to refer toÂ Harmony Korine‘sÂ Spring BreakersÂ as some kind of drug-addled, neon fever-dream but that characterization comes with its own baggage that might diminish both the film’s satirical aspirations and craftsmanship. Oh, and let’s not overlook just how enjoyable the viewing experience is. Yes, I’m using the word “enjoyable” to describe a film from the writer-director ofÂ Gummo,Â Julien Donkey-BoyÂ andÂ Trash Humpers.

As you can probably gauge, I don’t have the most affectionate relationship which Korine’s past work.Â KidsÂ (a film he wrote when he was still a teen, directed byÂ Larry Clark) was an odd right of passage for my generation and I vividly remember being both fascinated and repulsed by what I was seeing on screen. It wasn’t my experience of youth and yet something about the rawness rang true.

Somehow, perhaps because of some kind of arrested development or his marriage toÂ Rachel KorineÂ – one of the four young stars of theÂ Spring BreakersÂ – the experimental filmmaker has managed to keep his finger on the pulse of the current culture and deliver a film that’s as real and socially relevant as he did 18 years ago. However, as biting and/or irreverent asÂ Spring BreakersÂ often gets, it’s also undeniably hisÂ most accessible film to date as well as being his biggest (and first real) commercial success.

But don’t mistake commercial success for commercial or mainstream filmmaking because, even thoughÂ Spring BreakersÂ is dressed up like an R-rated teen sex-comedy and features some well known young starlets, the result is anything but conventional. From the ostentatious aesthetic to the purposefully repetitive narrative, Korine creates the ultimate embodiment of YOLO- and celebrity-obsessed culture before pushing it to the extreme. And the result is scary, not to mention hypnotic and incredibly engrossing.

The casting of former Disney princesses like Selena Gomez and Vanessa Hudgens is no coincidence. However, they end up bringing more than just their image to the table. Gomez’Â portrayal of the not-so-subtly-named Faith anchors the film opposite her increasingly more dangerous group of girls, including Rachel Korine, Hudgens andÂ Amber Benson, as well asÂ James FrancoÂ as the local thug named Alien.

The women ooze enough or excessive sexuality to make you question leering at these young bodies. But Franco is the real stand-out and deserves all the statues come awards season. One scene in particular is likely to become an instant classic and quoted endlessly.

Korine, his crew and many of the other creatives also deliver phenomenal work. Cliff MartinezÂ andÂ SkrillexÂ contribute a brilliant and truly original score andÂ Douglas CriseÂ excels of editing.

Spring BreakersÂ will not be for everyone and there is also the danger that some who love it will do so for the wrong reasons. Lost in the glitz, glamour and girls, some will surely miss the point all together. However, Korine tries to ensure that those reactions will be few and far between by pushing the story to its irreverent extreme. Actually, it seems that a lot of the target(ed) demographic – i.e., the late teens/early twenty somethings depicted in the film – have not been impressed withÂ Spring BreakersÂ and the backlash from that generation may be the ultimate sign of Korine’s vision succeeding. When forced to look in a mirror, sometimes you don’t like what you see.