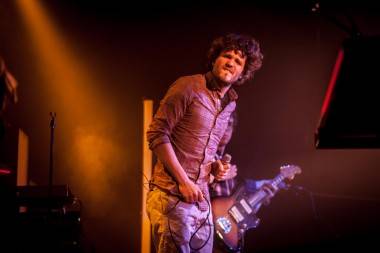 The album marks the band’s first outing as a four-piece with members Wes Miles on vocals, Milo Bonacci on guitar, Mathieu Santos on bass and Rebecca Zeller on violin forming the core of the group. The 11 songs onÂ Beta LoveÂ are heavily informed by the works of Vancouver-based cyperpunk novelist William Gibson and futurist Ray Kurzweil’s musings on the technological singularity and transhumanism.

According to a press release, Ra Ra Riot was inspired by its “lean new lineup” and “the recording process foundÂ RaÂ RaÂ Riot’s members exploring and re-defining their roles within the new makeup of the group. They built upon demos created mostly by Miles and producer Dennis Herring (Modest Mouse, Elvis Costello, Wavves) at Sweet Tea Studios in Oxford, MS. For the first time in their history the band recorded in a warmer climate and found themselves stimulated by the balmy Southern air and the physical setting of Oxford. Joined by session drummer Josh Freese (Devo, Nine Inch Nails, Weezer) the band enjoyed exploring its potential, experimenting with new influences and exciting sounds.”

“Inescapably catchy… RaÂ RaÂ Riot’s strings once made you sway gently; Beta Love demands that you get up and move.” – Washington Post

“This is a song that gets the prize for the catchiest track I’ve heard so far.” – “Is It Too Much”, NPR Music “All Songs Considered