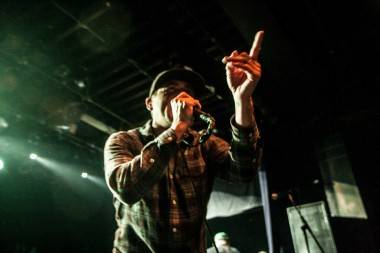 Reunited and it feels so good. Pennywise played Vancouver Thursday night as part of a 25th anniversary tour that saw the punk rock band back together with lead singer Jim Lindberg.

Since forming in 1988, the SoCal bandÂ has amassed “an international following through relentless touring and a melodic high energy sound merging melodic surf punk, blistering hardcore and the classic punk of their youth,” says the press release.

After Lindberg left the group in 2009, the rest of the lineup – guitarist FletcherÂ Dragge, bassist Randy Bradbury, and drummer Byron McMackin – brought in a new vocalist. At the time, Lindberg expressed feelings about this development that, apparently, were not positive.

Vancouver Sun music writer Francois Marchand, reviewing the Commodore Ballroom show, writes, “Pennywise lunged headfirst into their 80-minute set at breakneck speed, opening with ‘Wouldn’t It Be Nice’, the crowd singing along with Lindberg on the song’s anthemic chorus…

“‘My name is Jim, I’m back in the band. What’s up?’ Lindberg quipped, deadpan, between two songs. ‘I never left the band, you just didn’t know that. Haha!’

“Almost as if it was nothing, Lindberg dismissed three years of acrimony between him and the rest of Pennywise.”