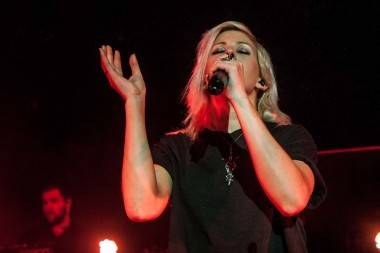 If there’s anything that popular music can thank the British for, it would be their ability to produce surefire hit female singers. From soul songstresses like Adele, to indie darlings like Florence and the Machine, to straight pop tarts like Jessie J, it’s hard not to take notice of this current trend. Add singer-songwriter Ellie Goulding, who brought her live show to a sellout crowd at the Commodore Ballroom on Tuesday, Feb. 5, to that list.

Read our interview with Ellie Goulding

The 26-year-old Herefordshire, UK native is no stranger to success in her home country. Her 2010 debut Lights quickly reached the top of the UK charts. She has played in major European music festivals like Glastonbury and has garnered much critical acclaim, including winning Critics’ Choice during the 2010 Brit Awards. It was apparent then to think that her success would cross the Atlantic, proven two years later with the immediate positive response to her 2012 sophomore album, Halcyon, even getting her songs featured in American reality music shows like The Voice and X Factor. And, judging by a dance floor that was already packed long before opener St. Lucia hit the stage, Goulding’s popularity is indeed alive and well, at least here in Vancouver.

St. Lucia, also known as New York-based musician Jean-Philip Grobler, was the perfect opening act. His brand of synth-laced indie dance pop was the best way to pass the time, with the crowd happily dancing along to selections from his recently released eponymous EP. Much like his tropical-destination-derived name, St. Lucia’s music is a potent mix of lush electronic island beats and layered melodies, reminiscent of bands like Friendly Fires and his Neon Gold labelmate, Passion Pit. Catchy electro-pop tracks like the current single “September” immediately put everyone in a warmer mood. Having recently opened for Two Door Cinema Club during that band’s Vancouver stop last year, St. Lucia has already made his musical mark. With a full-length album scheduled to be released later this year, this will probably not be the last time we will hear of him.

The crowd roared as Goulding started her set, opening with the first song from Halcyon, “Don’t Say A Word”. The crowd’s excitement was palpable, even surprising, given the fact that she wasn’t a household name in North America until recently. But she isn’t just for British ex-pats and anglophiles anymore, as the audience sang along to a number of songs from her set. The dubstep-heavy “Figure 8” was a crowd-pleaser, as was her Calvin Harris collaboration, “I Need Your Love”. She slowed things down midway with her dreamy current single, “Explosions”.

At times she relied heavily on backing vocal tracks, the strain on her voice apparent from the grind of the current tour. But she still carried on, even showcasing her vocal range in an acoustic version of Lights’ “Guns And Horses”, and a stripped-down, soulful piano cover of Elton John‘s “Your Song”. The night ended with her two biggest hits -Â “Anything Could Happen”, the first single off of Halcyon, and a rousing encore of the title track from her debut.

There was nothing particularly spectacular about Goulding’s performance. It was just her, onstage, with her touring band, a simple drum kit, and a plain light and stage backdrop. But she was in full command of the crowd, and by show’s end, the seemingly unassuming singer had rendered everyone voiceless from screaming. For Goulding, this Vancouver stop proved that there’s room for yet another British female vocal powerhouse.