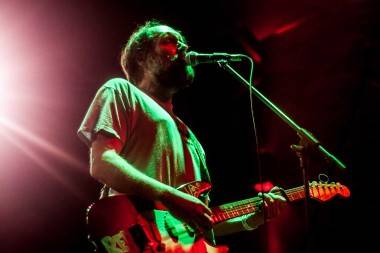 Photos – Built to Spill at the Rickshaw Theatre, Vancouver Feb. 6 2013

The band was one of alternative rock’s golden boys band back in the ’90s for albums like There’s Nothing Wrong With Love and Perfect from Now On. Led by singer/songwriter Doug Martsch, the group specialized in guitar-heavy songs that encapsulated what it was like to come of age in the grunge decade. For that, The Snipe News will always have a soft spot in its heart for Built to Spill.

However, photog Christine Redmond reports that the band didn’t seem overly enthused to be playing its Vancouver show, the first in many years in this town. “It was okay,” Christine wrote. “They played some older stuff which was good but they all looked miserable on stage like it was the last place they wanted to be!”

According to Wikipedia, the band’s last album was 2009’s There is No Enemy. The current lineup isÂ Martsch, guitarists Brett Netson and Jim Roth, drummer Steve Gere and bassist Jason Albertini. Here’s hoping the band was just having an off night, and that Built to Spill’s other gigs are more kick-ass. And also, that there’s a new album in the works.