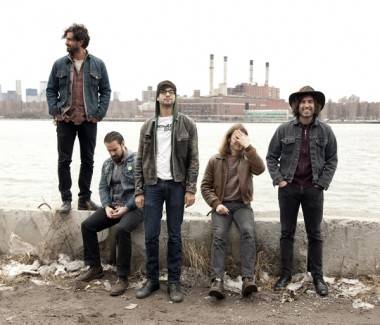 The Men have released a new live concert video for their song “Electric”. Filmed in London at Shacklewell Arms, the video presages a new album, New Moon, out March 5 on Sacred Bones Records. The group will follow up with an extensive tour, including a Vancouver show at the Biltmore Cabaret April 29.

From the press release:

“The Men quit the city in early 2012 to head for Big Indian, NY – transforming a remote Catskills locale into a full-fledged stray dog studio home. Entering with only the most skeletal sketches, the house was selected as an incubator for its technical limitations, 32-hour orbit and predisposal to celestial intervention.Â New MoonÂ is simultaneously an expansion of palette and a contraction of focus. It is a love letter devoted in bowed humility to the grand continuum, exposing the hoax of the great divide. Allegiances to the glowing patinas of Detroit and San Francisco, New York and Nashville all abound, but ‘nostalgia’ is not her name. The band’s clear ethos is to revisit but never retread.