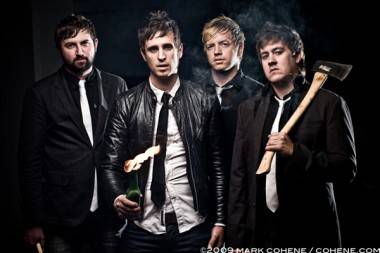 Vancouver indie-pop rockers Sweetheart have released a new video for their song, “David Bowie is Dead”. The track is off the Â foursome’s six-song EPÂ XOXOX, released in August by Porterhouse Records.

Self-financed and directed, and a tribute to felines everywhere, the video explores a breakup between frontman Marty ZylstraÂ and his girlfriend. Unaware of her cruel intentions, he merrily chuckles over a glass of wine, and then she hastily removes a ring from her finger, takes a swig from a bottle and storms away.Â Devastated, he cries and throws his fists down on the hood of his car. At home his pet cat literally wipes away his tears, as an adorable grey paw tissues a tear from the corner of his eye. Â Meanwhile, in a house filled wall-to-wall with cat pictures, the band rocks away readingÂ Cat Fancy,Â andÂ one of them even sports a cat mask.

In addition to XOXOX, and 2008’s full-lengthÂ Map of the Human Heart,Â Sweetheart just released an EP for remixes of “David Bowie is Dead”. In a contest held by IK Multimedia, the group judged remixes of the popular song sent in by fans. Submissions came from all around the world, such as The U.K., Argentina, and the Netherlands, inspiring the band to create an EP of the remixed tunes.

“Continuing to write song after song, the boys are ready to break-out with their upcoming untitled release. A culmination of two years of writing and growing, living and hurting, it will showcase a maturity with a harder & darker edge. In true Sweetheart style they’ve taken the trials and tribulations of their life, and turnedÂ those emotions into instantly relatable songs.” -Â CBC MusicÂ