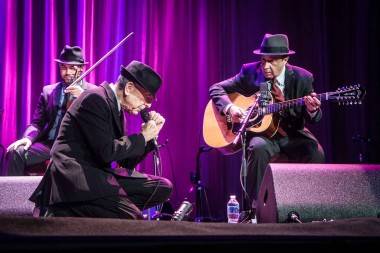 It’s been said before, but deserves to be said again: Leonard Cohen is a class act.

It’s not just his sartorial flare, though his suits are well-fitted and his fedora strikes just the right touch of world-weary romanticism/cynicism (Raymond Chandler crossed with Frank Sinatra). It’s not just the way he’s more than happy to play for three hours, and stuff that time with the songs people came to see and hear (“Suzanne”, “Hallelujah”, “Closing Time”, to name a few). Nor is it the way he’s brought along a nine-piece band of top-flight musicians and singers to bolster his dry, raspy croak.

No, it’s the way Cohen, still spry, pays honour to those musicians and the audience.

The Montrealer never seems to take for granted either the fans who have shelled out big bucks to see him or the musicians who have thrown in their lot with the septuagenarian. To show his appreciation, or something, at Monday night’s Vancouver show he spent a good deal of his time kneeling, sometimes in front of Javier Mas, his Spanish-born bandurria and 12-string-guitar player, sometimes (it seemed) in deference to the audience.

Cohen introduced the whole band twice, and gave everyone a chance at the spotlight. He noted that background vocalist Sharon Robinson, who first accompanied him on tour in 1979, had co-written some of his best-known songs. During the second half (following an intermission), Robinson was given a solo turn on the tune “Alexandra Leaving”, from Cohen’s 2001 album Ten New Songs. The other two backup singers, Charley and Hattie Webb, also got turns in the spotlight. 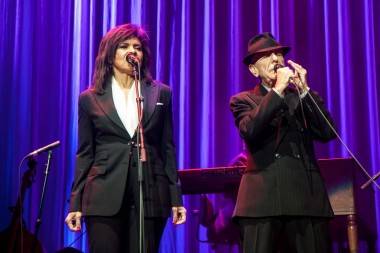 True, there were times when Cohen was at his most mockable–that is, his most Cohen-esque–especially when reciting the verses of “A Thousand Kisses Deep”, made even more louche by his deep-voiced growl (if you closed your eyes one could imagine a muppet saying lines like “I’m turning tricks, I’m getting fixed,Â I’m back on Boogie Street”). But to his credit, Cohen and his band made even “Hallelujah” and “Suzanne” seem, if not fresh, then certainly as though perhaps not all the life had been squeezed out of them by the dozens if not hundreds of lazy and ill-informed cover versions they’ve inspired.

There were a few new songs, from his 2012 album Old Ideas, thrown into the evening as well, including “Going Home”, “Amen” and “Darkness”. These sounded good but not great up against a catalogue that includes “Ain’t No Cure for Love”, “Take This Waltz” and “Bird On a Wire”. Also notable was a timely “Democracy”, a disco-fied “First We Take Manhattan” and an absolutely stellar “Closing Time” to close the show. But you’d pretty much have to hate music not to love that one, a marvel of melody and wisdom. And what better way to end a night than with the words,Â “And I lift my glass to the awful truth/which you can’t reveal to the ears of youth/except to say it isn’t worth a dime.”

Yep, a class act all the way. Memo to Dylan.

One response to “Leonard Cohen at Rogers Arena”