The Carrie promÂ scene has to be one of the best parties in a horror movie. Kids getting dunked with pig’s blood, the school gym going up in flames, and lots of laughs all around. It doesn’t get much better than that. 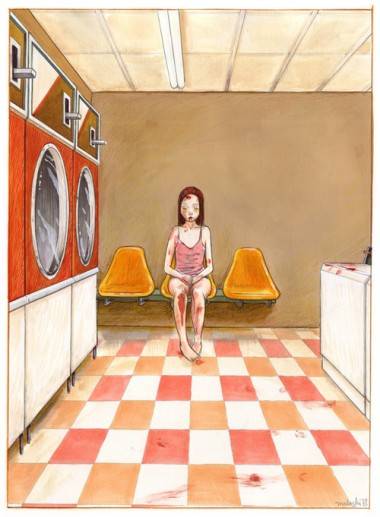 A fantastic painting by artist Malachi Ward titled “Carrie at the Laundromat” illustrates exactly that scenario, Â and it will be shown as part of this weekend’s Horror HangoverÂ at Hot Art Wet City’s pop-up gallery. It’s one of 30 pieces that shows the aftermath of a horrific event.

Horror Hangover is curated by Robin McConnell, who hostsÂ weekly interviews with cartoonists on CiTR’s always-great Inkstuds show. With access to so many artists, McConnell told The Snipe in an email that he went with the horror concept because it gave the contributing artists lots of room to play with:

“I don’t like to dictate to artists that are far talented than I could ever be, so I figured this concept was open and gave a lot of leeway,” said McConnell.Â “I just picked a bunch of folks that I really liked and asked them if they were up for it. It was really important for me to bring together a unique group of folks. A lot of the artists are from out of town, with people from New York, Ottawa, Toronto, Philly, Seattle, Port Alberni and more.”

And if you want to haunt your walls with some original art from the show, it’ll only set you back $100–a ridiculous steal to pick up paintings from the likes of Al Columbia, Michael DeForge and Rebecca Dart. 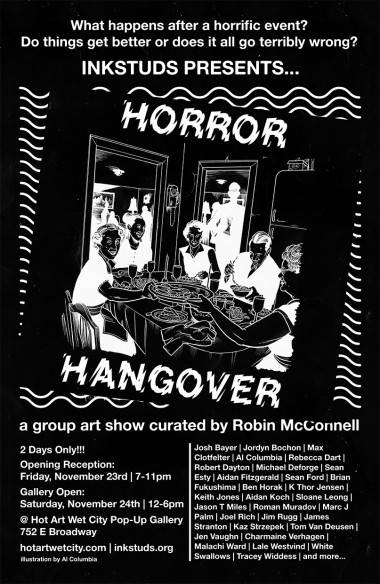