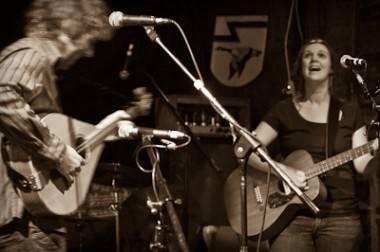 The record was released by Six Shooter Records on Oct. 12. It’s a follow up to Curran’s 2010 Juno award-winning album, Hunter, Hunter. Since the start of the millennium, Curran has released four other albums as well.

Curran has been praised for her storytelling, and her ability to hold her audienceÂ spellbound with each word. Her cryptic lyrics encourage listeners to dig for deeperÂ meaning. Curran’s minimalist style is preserved with the subtle complement of strings,Â horns and vocals of guest musicians including The Once, Martin Tielli, Todor Kobakov,Â Bryden Baird, and Selina Martin.

The tour began the day of her album release in her hometown of St. John’s, Newfoundland. Since then, she’s been traveling west with her band towards her final stop in Vancouver. While Curran has been passing through the towns in her tour, her performance has stayed with her fans long after she’s gone.

In Lynn Saxberg’s review in the Ottawa Citizen of Curran’s recent Wakefield, Quebec performance, she wrote, “Without the sweeping production of the album, the quietly intense ‘Soft Wooden Towers’ and the understated might of ‘The Great Escape’ could have fallen flat, but in a testament to the beauty of Amelia’s writing and the emotional punch of her voice, they were just as powerful performed solo on acoustic guitar. ‘Awesome,’ one fan exclaimed between songs, a spontaneous outburst that erased any tension in the room.The tension was a result of the nerves present in both Curran and her fans regarding how the album would be received.”

The Vancouver show opens with another Canadian singer/song writer, Joe Nolan. Doors open at 7 p.m. and tickets are available through the Media Club.

Video–Amelia Curran, “What Will You Be Building”: