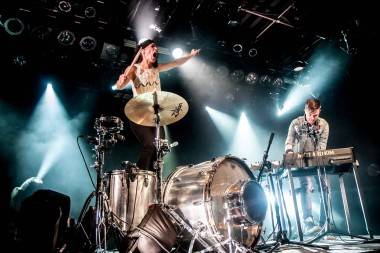 Matt and Kim played the Commodore Ballroom in Vancouver, Oct 28 2012.

Williamsburg couple Matt Johnson and Kim Schifino brought their high-engery electro-dance beats to Vancouver on Sunday. The sweethearts have been making music together since 2005 and are renowned for their catchy, bouncy performances. Equipped with drums, keyboard, balloons, confetti and the closest thing to a J-Lo booty shake this side of the border, the duo were ready to transform the Commodore into what Schifino described as ‘a mother-f***ing house party!’

Currently touring their fourth album Lightning, the pair seemed enthused to be wrapping up the Canadian part of the tourÂ  in Vancouver.Â  Leaping up an down from behind her drum set, Schifino looked deliriously happy as she screamed ‘Vancouver why are you so f***ing good to us?’ 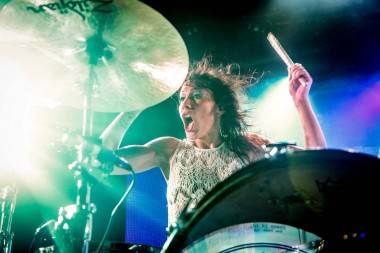 The on-stage antics of the happy couple are pretty contagious. From crowd-surfing to inciting competition between Canadians and Americans, the band know how to work an audience.

I hadn’t seen a crowd dance like that since Girl Talk played on the same stage in September. Matt and Kim were clearly impressed too; so much so that Kim took off her bra in appreciation. Matt and the rest of the guys at the show took a backseat as Kim wrapped up with “The girls in Vancouver have f***ing balls. Vancouver let’s do this together!”

More Matt and Kim at the Commodore Ballroom photos:

One response to “Matt and Kim in Vancouver – photos”