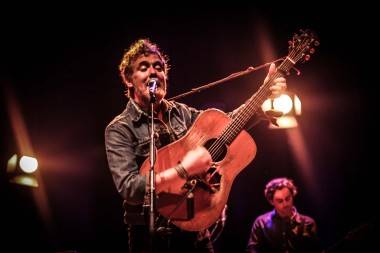 Glen Hansard on tour for his debut solo album, Rhythm and Repose.

The Irish musician is the lead singer of The Frames, as well as part of The Swell Season with Marketa Irglova. The two also starred in the 2007 movie Once, which won an Academy Award for best song (“Falling Slowly”). Once also became a Broadway play and was nominated for 11 Tony Awards.

Hansard has been touring with a 10-piece band. In a review of his Sept 28 show in Milwaukee, Piet Levy of the Journal Sentinel wrote:Â “Hansard excelled with the big band behind him, taking his music to unexpected places. The peppy love jam ‘Love Don’t Leave Me Waiting’ from this summer’s solo album Rhythm and Repose shouldn’t segue to Dixieland jazz so easily, and yet the band made it work – and then seamlessly transformed the jam into a wild cover of Aretha Franklin’s ‘Respect’.

“When he performed alone, Hansard was exceptional – even taking on The Frames’ slow burner ‘Say It to Me Now’ and love-struck Irish melody ‘Gold’ (made famous in Once) on acoustic guitar, without any microphone at all (the latter included backing vocals and accompaniment on violin).”