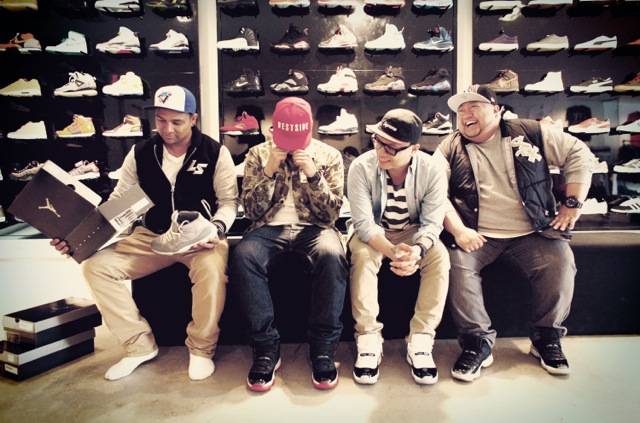 On Tuesday, Oct 23,Â Boombox SaintsÂ released their latest album,Â For the Moment. Following suit with all up-and-coming hip-hop acts in today’s climate, the Vancouver group made their record available for free download on their website, as well as for purchase on iTunes.

The release is their third, and follows 2010’s The Boombox EP, and 2011’s Bringin’ the Boom Back. Recorded over 10 months starting in late 2011, the album sounds more mature and experienced than the last two. The stories of the highs and lows in relationships, both romantic and familial, have a genuine feel and little is held back in their writing. Â In the band’s press release, group member Freeky P described the album as, “a post-modern, modern epic love tale of our collective lives tracked by a New-stalgic soundscape, detailing the joys and falls of relationships in the never ending chase of happiness.Â In short, walk 14 songs of our lives and you’ll forever be changed.”

The album features production from Vancouver’s ownÂ DJ HUNTÂ and, on five tracks, fromÂ DJ KEMO. They give tracks like “Blind” and “By My Side” a highly polished R&B sound with a pop music feel. Vancouver’s own Vanessa Villabroza shines on “By My Side”, on which she adds a layer that compliments the song’s airy synths, making it one of the album’s standouts.

The strength of the Saints lies in their R&B hooks and verses. Almost every track comes with a sung hook but some of the most memorable moments are the melodic verses sung on tracks like “Walk on By” and “Can’t Be (Interlude).” The latter has a very familiar moody and introspective sound that has been prominent in hip-hop sinceÂ DrakeÂ championed the sound onÂ So Far GoneÂ in 2009. Every member sounds at home on these types tracks and all the verses, sung or rapped, complement each other well over the sensual chords.

The album’s only major downfall lies in some of the clichÃ© hooks and verses found on the first few tracks. While the underdog story and the pursuit of greatness always seems to be a theme for artists trying to break through, Boombox Saints don’t seem to bring any new perspective or originality to the concept. However, the tracks aren’t too much of a misstep, and as they hit their stride with the slower cuts, For the Moment becomes much more engaging and authentic-sounding.

The quartet has been slowly building up their name around town by opening for current hip-hop starsÂ like J. Cole,Â Jay Electronica,Â Kid Cudi, and most recentlyÂ Big Sean. However, going by the quality onÂ For the Moment, they will be headlining their own shows soon enough.