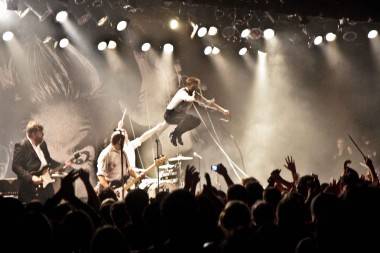 Photos – The HivesÂ at the Commodore Ballroom, Vancouver, Sept 6 2012

TheÂ Hives kicked off a West Coast tour Thursday night in support of their new albumÂ LexÂ Hives. Photog Christine Redmond was there and she got some amazing photos. She said this about the show: “The Hives were amazing last night. Possibly the best show I’ve ever been to and best gig photos I’ve been lucky enough to shoot.” 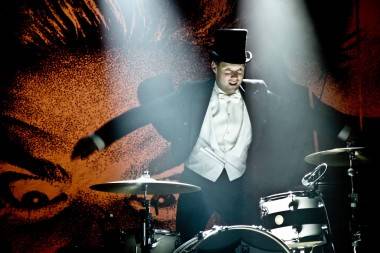 MagnetÂ said of Lex Hives, “Situated halfway between the primordial raunch ‘n’ roll of AC/DC and the primeval roar of the Stooges,Â LexÂ HivesÂ brings a bazooka to the proverbial knife fight. Light fuse, run away.” They go on to assert, “Message: TheÂ HivesÂ are back in business – the business, that is, of kicking motherfucking ass.”

The band’s newest albumÂ LexÂ HivesÂ received praise fromÂ NME, which said “Let it be said thatÂ LexÂ HivesÂ is amazing,” andÂ Q Magazine‘s 4-star review asserted “LexÂ HivesÂ fizzes with the energy of a debut album, the quintet emphatically back to what they do best.”Â The IndependentÂ stated, “IfÂ LexÂ HivesÂ has one fault, it’s that it makes you want to switch it off, go straight out and see theÂ HivesÂ live,” andÂ Entertainment WeeklyÂ added their two cents with “TheÂ HivesÂ have returned to remind us the Swedes do it better.”