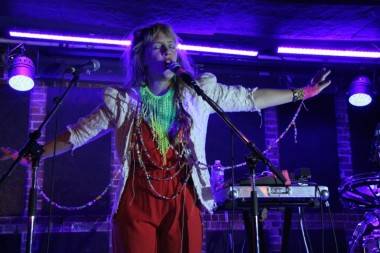 Photos – Niki and The Dove at the Electric Owl, Vancouver Sept 1 2012

Niki and The Dove played the second show of their 2012 North American tour Saturday night at the Electric Owl in Vancouver. (The first show was the night before in Los Angeles.)

A nearly full-house greeted the Swedish duo of Â Malin Dahlstrom and Gustaf Karlof. They’re on tour for their debut full-length, InstinctÂ (Sub Pop) which includes the song “DJ, Ease My Mind”.

That song came early on in Niki and The Dove’s brief set, which had only songs from that album and a previous EP from which to choose.

Dahlstrom’s voice, which sometimes soars into Stevie Nicks territory, was the highlight of the show, along with her interpretive dance moves as well as interesting fashion ensembles (was that really a red pantsuit with a toreador-style jacket overtop? And what about that flowered headdress?). Karloff’ played keyboards and percussion and tripped the backing tracks, and his Kraftwerkian demeanor was suitable complement for Dahlstrom’s more eccentric moments.

As a friend noted, the songs were a little thin as well; no instant pop hits, though “DJ” comes close.

Perhaps that song is being played at gay clubs. Judging from the front of the stage at last night’s show, Niki and The Dove seems to have connected with a gay audience – either that or the latest hipster fashion trend for guys is tank tops.

If you like Instinct and are just looking for a fun hour of electro-pop, Niki and The Dove’s live show will satisfy. Personally, this concert-goer would have liked to have seen them do a cover or two, and tried just a little harder win us over.