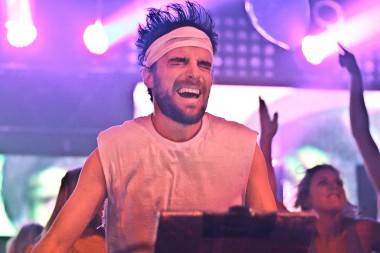 Girl Talk, aka Gregg Gillis, played the Commodore Ballroom in Vancouver Friday night. He is on tour for his most recent release, All Day.

Photog Christine Redmond had this to say about the show:

“This was the hardest gig I’ve ever photographed but also really enjoyable. When GT came on stage a bunch of balloons were released from the ceiling but they ALL fell into the photo pit so we were all elbow deep in balloons and the only way to move was to jump around and try burst them 🙂 This was shortly followed by guys shooting the crowd with toilet paper! Because all GT’s sound equipment was so tall you couldn’t really see him so I had climbed on top of one of the chairs in the pit to get some height and a better angle and got caught in the crossfire of toilet paper. Not a pretty sight 🙂 After detangling myself and attempting again to photograph from a height the crowd behind the barrier thought it’d be really funny if they pulled up my skirt while I was shooting. It was okay though … I was wearing tights 🙂 It was a very memorable gig, lots of fun!”

In an interview with Stuart Derdeyn at the Province, Gillis described his stage set-up.

“It’s essentially a custom L.E.D. based stage design in three layers. There’s one behind me, one in front of me and a third hanging if the venue can handle it. This began in early 2011 when we went out with it the first time and now I can’t imagine the show without it.”

Gillis also describes his philosophy behind his shows.

“I even see it as pretty vital to electronic music to raise the bar a lot higher as it doesn’t have any of that instant engagement of a live drummer or musicians moving around. But even for rock bands working the 1,000-2,000 size venues it isn’t enough to just show up and play now. Everybody is upping the game and paying attention to production values. It’s competitive and people do inspire others. For me, it used to be a punk rock vibe free-for-all, but now that whole idea reached its maximum potential after we got over a certain size.”