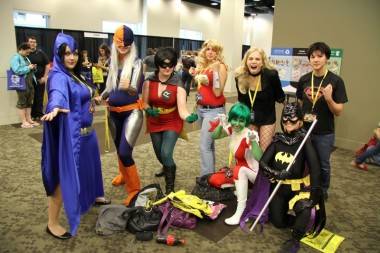 This past weekend, the second annual GeekGirlConÂ celebrated the contributions of women creators and fans to science fiction, comics, fantasy and more.

The two-day event took place at the Seattle Conference Centre in downtown Seattle. PR director Susie Rantz was estimating that the first day, Aug 11, brought 3,000 people to the Con.

On the main floor, a gaming area was set up. The second floor hosted panel discussions in conference rooms. There were also panel discussions in rooms on the third floor, including Gail Simone and “the Batgirl of San Diego” (so-called because she spoke up about the lack of female creators at DC Comics at the 2010 San Diego Comic-Con, while wearing a Batgirl costume; she is one of the cosplayers pictured above) discussing the role of women artists and writers in mainstream comics.

On Saturday, the only day we were able to attend, other panels included discussions of science and technology, women and games and female characters in Star Wars.

The third floor hall was also where exhibitors set up their tables. Seattle publisher Fantagraphics was there, and Ellen Forney and Megan Kelso were signing books when we stopped by. Portland-based writer Greg Rucka (Batwoman, Stumptown) was one of, if not the only, male author. Gail Simone, writer on Batgirl and Birds of Prey, met her fans at a signing after the discussion.

One makeup company had the bright idea of hiring someone in a Wookie costume. The hairy Star Wars character proved to be one of the most popular attractions. After posing for a photo, he handed his new friends flyers for the makeup products.

The con had a family-friendly feel to it; there seemed to be quite a few families.

Evening entertainment was to be provided at the Conference Centre by the nerd-rock band the Double-Clicks. A masquerade ball was also planned for the evening, as well as a Buffy singalong (people singing along to the musical episode of Buffy the Vampire Slayer).

However we were at a meet-and-greet at a local craft-beer establishment, where we met a neuroscientist, a producer of a documentary about female supeheroes, Comics Bulletin‘s Jason Sacks and a few Vancouverites who had made it down for the con, including journalists Chelsea Novak, Jordan Abel, and gamers Sarah and Corinne Giraud.

All in all it was a fun experience, and one I’ll definitely be looking forward to next year.

Looking for a costume? You can always try sites like Kijiji.

One response to “GeekGirlCon 2012”