Yes, It really happened, lead vocalist John McCauley unbuckled his belt, unzipped his fly, slid his ripped/tattered jeans down his legs and reached inside his underwear and He Whipped It Out. Then, he strummed his guitar with his penis in a final song, climactic frenzy. Now, That, ladies, gentlemen, boys and girls, is MCRnR, Maximum/Cock Rock/n/Roll! There, now that the naked and the lurid stuff of the legend/making of John McCauley’s cock strummings in The Peg are out of the way…

Who Ever Will Dare forget Deer Tick’s mythic first appearance in Winnipeg? Not a one of the 250 people at the West End Cultural Center. Where the Fuck were the other 150? Legendary shows only happen three times a year. And, that’s a fact. 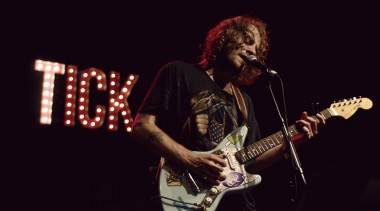 Not that he or his Deer Tick band mates needed the rock n roll parlor tricks. John McCauley played it stupid/acted contagious and He spread the infection to the audience. And, we danced and we soared with Deer Tick’s every note, beat, throb, in the heat of this monu(mental) night in Winnipeg. The band did a smashingly gripping version of Nirvana‘s “Bloom”. In fact, Deer Tick’s rock n roll heroes were given stirring/lifting tributes. I haven’t heard a better cover version of The Replacements/Paul Westerberg‘s “Kiss Me On The Bus”. The crack/ling, kis/sing cymbals of drummer Dennis Ryan, Beautiful. When members of the opening bands joined Deer Tick for a killer cover of The Beastie Boys‘Â “(You Gotta) Fight For Your Right (To Party)”, we were already deep in the throes of rock n roll’s live show collective orgasm.

“I got a lust for life/and a dangerous mind/in my trail of dust/who knows what you’ll find?” The Bump. The night’s second song and I already knew, Deer Tick rules. Just like Guided By Voices always did, The Replacements, Husker Du, Black Flag, Minutemen, Nirvana, too. 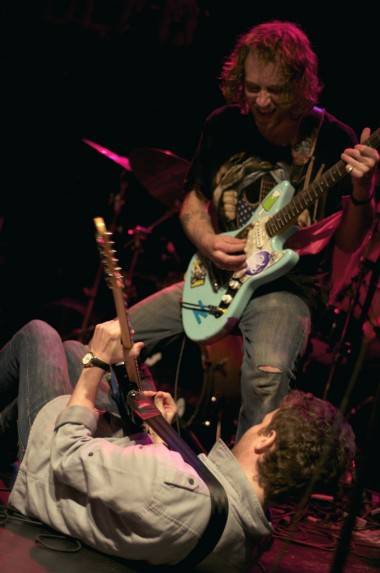 Not a dud in the 85-minute set, 20 songs. Not one. Every song, I was awe/struck, how Every song was so unimaginably crafted, illimitably textured, tempo/varied and heartbreakingly played with the fire and passion that only the great bands can possibly achieve. The song/crafting, the harmonies, the poetic lines, this is inspired (utterly) genius, and yet so seamless, that the songs sounded fresh. Like we were listening to the first live playings of every original. We were held by Deer Tick in witness, in a private listening party.

There are bands who torture songs. Songwriters with so many brilliant ideas. Just a few more and then, another more and then even more, until the song is exquisitely destroyed. Forever. Forever shattered into pieces of brilliant stupidities. Not so Deer Tick. It’s all a natural, flowing unconscious stream of staggering beauty. 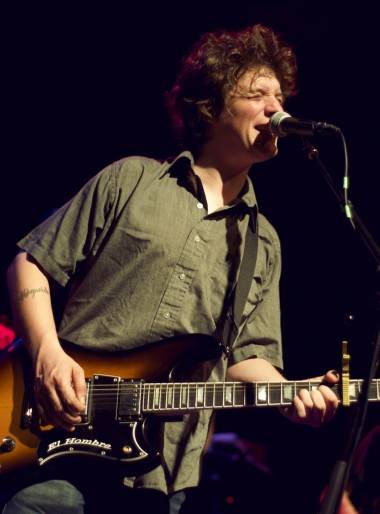 Ah, the antics. John McCauley’s head back, gobbing straight up in the air and catching the gob/ball in his open mouth, swallowing it, YUCK! The second time he did the gob/ball he managed to spray himself in splintered/spit/shower. Falling on his knees, to take a puff from an offered J, or to take downing gulps from his beer bottle, all the while, soloing. No hands. Just rock n roll parlor tricks. Accepting a shimmering red, Princess pageant sash from a 21-year-old birthday girl, Emily. He wore it the rest of the night. Thrusting his E guitar like a dick boy in hard/on/heat of adolescence. And, of course, the cock strumming. We’ll never forget. The antics.

The two dozen beers waiting on ice in a blue/tub/bucket in front of the drum kit. But McCauley admitted he wasn’t drunk. A cider and beer before the set. A toke, a couple of beers during the set. He was in Winnipeg to Impress. And so was the band. Ian O’Neil‘s (guitars and vocals) songs, gripping and thrilling. Chris Ryan, bass/vocals. Dennis Ryan, the big and softer beats/vocals. Rob Crowell, keys, vocals.

And, I Love a band that doesn’t “do” the encore bullshit game. They played 20 songs, they played 85 gorgeous minutes and I was never praying for an end to pathetic self/indulgence. I was elated and excited, every snap/crackling/minute of every song, just like the people all around me, pressed hard to the stage in collective celebration. We were singing, the Voices, the choir. We danced. We laughed and we howled. And, Yes, we RoaRed like caged, wild things.

The ending song couplet, a perfect cock/strumming/climaXXX, covering Beastie Boys and then Deer Tick’s own massive party anthem, “Let’s All Go To The Bar”. Get on youtube, find live footage and turn it up to MAX and get ready to join the revolutionary mayhem. Maybe, just perhaps, you’ll find live footage from The Winnipeg show. 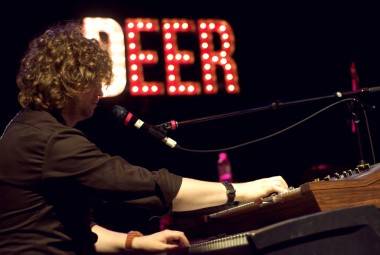