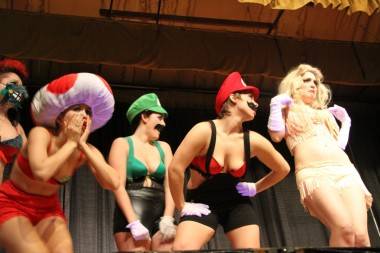 After playing to a packed house and enthusiastic response, VanDolls Burlesque are putting on another Video Game Burlesque show, this time at the Red Room.

The first VGB show, Feb 10 at the Royal Canadian Legion on Commercial, featured the troupe’s nine dancers acting out Super Mario, Tetris, Tron and more to a rowdy and sold-out audience.

The March 31 Red Room show will be the same as the first, says VanDolls Burlesque dancer Ruffelsilkskin, aka Kayleigh Lum. But they hope to prepare a new show for next year.

“The first went better than we expected,” says Lum. “All of our girls had a good time and we had lots of really good feedback, which is another reason we want to do it again.”

The new venue has the same capacity as the Legion, but is more “all-inclusive”, says the performer; this time they won’t have to worry about a doorman or supplying the booze – or, presumably, blowing a fuse (which happened at the Legion). “We can just focus on the show,” says Lum.