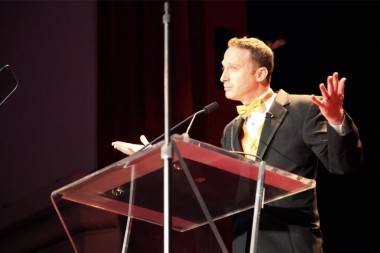 This past weekend, Vancouver’sÂ Robin Esrock MC’d the prestigious Explorers Club’s annual dinner at the Waldorf-Astoria in New York City. The 1,000-capacity event’s theme was How Far is Far: Remote Places, andÂ was sold out at $6000 a ticket. The annual dinner is the largest fundraiser of the year for the 108-year-old club, which attracts explorers, scientists and industry leaders from around the world.

As Master of Ceremonies, Esrock says his job “was to to keep the evening going and present these really big awards.” The biggestÂ went to Philip Currie, the Canadian paleontologist who is said to have been among the inspirations for the Sam Neill character in Jurassic Park.

Esrock’s new adventure-culinary TV seriesÂ Get Stuffed will premiere on OLN this summer. He’s currently working on a book,Â The Great Canadian Bucket List, for publication next year.