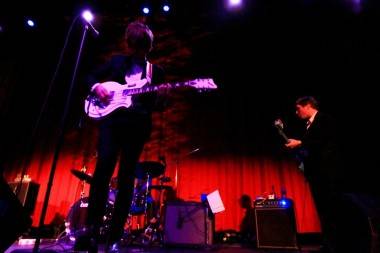 Review and photos – Islands at the Rio Theatre, Vancouver, March 8 2012

Islands made their way to Vancouver’s Rio Theatre last Wednesday, at the tail end of their North American tour. Now based in L.A., the modernist pop band formed in Montreal in 2005, following the dissolution of front man Nick Thorburn‘s previous project, The Unicorns. They are currently promoting their fourth full-length release, A Sleep and a Forgetting, possibly their most somber and heartbreaking record to date (ironically, the LP dropped on Valentine’s Day).

The night was tranquil to begin with; the young hipster audience seemed to get a little too comfy in their seats for opener Idiot Glee‘s set (although he introduced himself simply as James). The down-to-earth fella hails from the bluegrass region of Lexington, Kentucky, a seemingly unlikely spot to produce an experimental dream-pop artist, who moulds tracks by looping echoing synthesizers and digital drum beats. 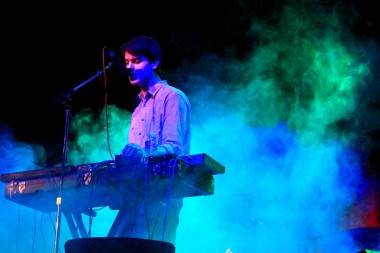 He showcased the supremely catchy songs from his debut Paddywhack, but struggled at times to truly connect with the audience after encountering some technical difficulties on stage. With blown monitors and poor live sound engineering to battle with, the fresh-faced star understandably appeared a little dejected. But he powered through like a champ, closing his portion of the show with a ghostly interpretation of Bill Withers‘ “Ain’t No Sunshine”.

After that heartbreaking number, I expected Islands to lift the mood a little bit with a more uptempo introduction. But the air in the theatre only grew heavier as they opened with the dark and droning “Same Thing”. The stripped-down performance felt like a departure for the band, usually known for bright melodies and a playful sensibility. Instead, what fans got was a more solemn experience, recalling the works of artists like Roy Orbison and Paul Simon. The tunes that followed were no less sorrowful, from the lovelorn “In a Dream It Seemed Real” and “Oh Maria”, to the musical lament, “This is Not a Song”. The latter featured Thorburn on the piano, with guitarist Geordie Gordon adding weeping guitar riffs to the mix. 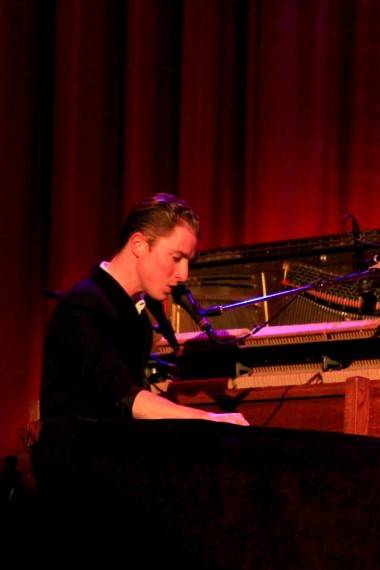 Once again, the audio levels in the room seemed to be a little off, and Thorburn and company kept urging the engineers to increase the volume, at least to drown out the drunken ramblings of some of the hecklers in the room. The sound rose just in time for Thorburn to belt the painful lyrics “Wondering why you won’t let me in. It’s been cold inside and it’s getting cold again”. It felt as though every song made even the oldest heartache wounds seem fresh.

Thankfully, the band broke the overpowering aura of melancholy with the bluesy “Shotgun Vision”, and brought in a touch of vaudeville with “Hallways”. On the former, Gordon and Thorburn had a rollicking time duelling away on the piano. Islands concluded the night with one of their oldies, “Hearbeat”, which led fans back to a more familiar territory. What started off as a moving and emotionally confronting event proved to be cathartic and healing.

Word of advice? If you’re strapped for cash and battling lovesick woes, skip the therapy session and pick up the new Islands record instead.